You are here: Home / Books / A Whole New Mind 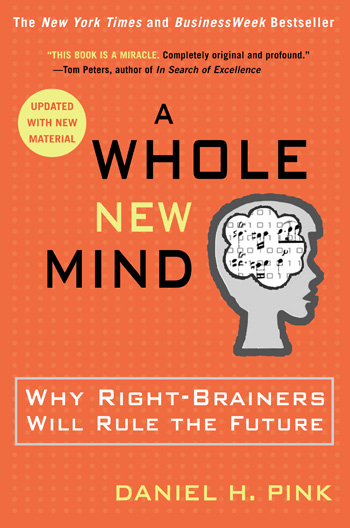 I have just arrived in Frankfurt, Germany for the Heimtextil trade fair. This once-per-year event is the largest trade fair for home textiles. I haven’t missed it since I first started attending in the middle 1990’s.

The trip from Minneapolis to Frankfurt requires a stop in Detroit. From Detroit to Frankfurt is something between a seven and eight hour flight, depending on the tailwinds. I usually read magazines and newspapers between MSP and DET, then I bring out the books for the long stretch.

I finished one called The Year of Magical Thinking by Dideon, which I received as a Christmas gift from editorial correspondent Mary Sausen. Linda Bentson of Thief River (MN) Linen was on the same flight from Detroit to Frankfurt along with her husband, Scott. She had also read this book and thought it told a wonderful, personal story about dealing with loss. I agreed yet still found the author’s grief so overwhelming that I had trouble reading it to the end.

I felt more enthusiastic starting my next book, which was recommended by family friend George Johnson. George and his business partner Jeff Staggs founded Entrevis, a company devoted to life coaching done through individual sessions and a program called The Better Way to Work, which includes The Seven Entrepreneurial Skills™. I know two people who are working with George and Jeff right now and say that the Entrevis approach is not only immensely helpful, but also life changing.

I sat next to George at a Heartland Circle Though Leader Gathering in December (I’ll blog about Heartland Circle, founded by Craig and Patricia Neal, at some future time). I don’t remember exactly why he brought up A Whole New Mind: Moving from the Information Age to the Conceptual Age by Daniel Pink, but by the time we parted I had made a decision to buy it. I’m glad I did.

The book begins by introducing the idea that left brain thinking, while perfect for the Information Age of the last century, isn’t enough for a Conceptual Age informed by abundance, Asia and automation. Pink calls these out as the causes behind L-Directed Thinking’s decline. In fact, left brain skills have nearly become commodities that can be bought in India or Russia for a fraction of what a US educated MBA costs. Rising up in status is the kind of right brain thinking that differentiates products and people—creativity, design, imagination, empathy and being able to see the big picture (connecting the dots).

Now at the one-third mark in this book, I love that the author has written about good design at moderate price points as a reflection of a consumer who is looking for more from products (Pink relates this to affluence). I also like that he calls design a “classic whole-minded aptitude.”

(In the interest of full disclosure, I must admit that I love analyzing a Profit and Loss statement. I have always been reluctant to reveal that because it doesn’t sound like anything a trend forecaster should have the remotest interest in. But it feeds my analytical side. That said, specifying just the right new color combination always has an emotional impact on me that is impossible to explain, and this is how I make my living.)

The dust cover tells me that the rest of the book will be devoted to what individuals and organizations will need to survive and thrive in this new paradigm. I can’t wait to read this book all the way to the end.