You are here: Home / Domestic Shows / A Forecast is Confirmed in High Point

I visited several showrooms today at the High Point International Furniture Market. One of the most significant trends I noticed from directional companies was the appearance of Skin-Tone Neutrals on the scene. They showed up primarily in upholstery fabrics of all kinds.

High end maker Hickory Chair called them Nudes. Laneventure didn’t give them a name but they certainly gave them lots of space on their showroom floor (see image). Barbara Barry created a palette of them for upscale Henredon, combining these tones in not only upholstery fabrics, but also in sheets, pillows and throws, sometimes playing them against White. Coordinating paint from Benjamin Moore formed a palette of Bone White, Bashful (a cosmetic Pinky Peachy hybrid), Revere Pewter and Sandy Hook Gray that worked as well on Ms. Barry’s beautifully-designed furniture as it did on the walls of the vignettes that housed them. 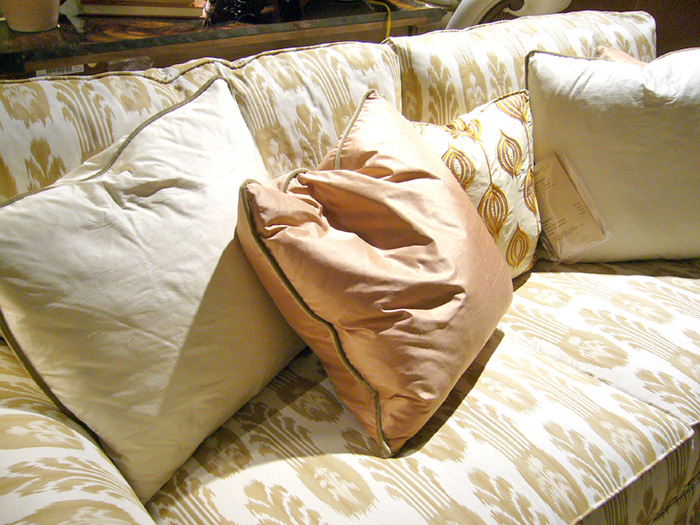 Two years ago, The Trend Curve developed a forecast called Skin-Tone Neutrals™ 2006 – 2007 (you can purchase this forecast from our Trend Store). It includes 20 shades of neutrals that go in a more personal direction. I worked on this project with my friend and colleague Erika Woelfel of the Colwell Color Studio.

I wanted to provide our subscribers and clients with this forecast because I believed so strongly in the potential of Skin-Tone Neutrals to act as a counter point to the riot of color that was building in the market.  A few early clues that these tones would prosper appeared within a year. Now that they are emerging in strength at the high end—other price points will just be getting into the game by the end of this year—I have already moved on.

While I feel gratified that I not only had the timing right, but also had the tones right, I won’t give Skin-Tone Neutrals another thought beyond appreciating how lovely they are. Instead, I am focused on what’s next. I’ll be presenting that forecast in a talk on Sunday at noon on the 11th floor ballroom. If you are in town, you can call The Interior Design Society for tickets to hear about what I am predicting for the future. I hope to see you there!