You are here: Home / Domestic Shows / Day Dreaming about A Kohler Sink

I had not gone more than a few feet beyond the entrance to KBIS, the kitchen and bath industry show at McCormick Place in Chicago, when I came to the gigantic Kohler booth. Since I have long admired Kohler products, I was happy to make this stand my first visit. 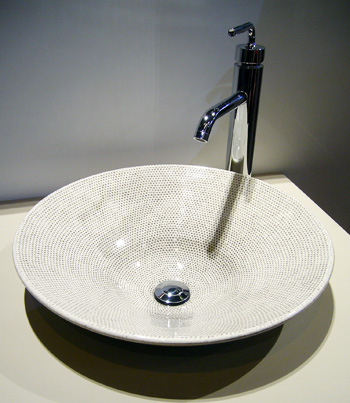 I was shown wonderful products for the bath during my tour. I especially liked the myriad of showerheads shown in one display that featured Kohler’s digital valve or DTV technology (it allows you to customize your shower with features like a pre-set temperature and your selection of showerheads when multiple options are present). I also liked the Mille Fleurs patterned sink with gold and platinum motifs that reinforced a metallic trend that is still building, and a sink called Tweed—for obvious reasons—that introduced an interesting visual and tactile texture to the bath (you can see it at left).

It was in the kitchen displays, however, that I lost my heart. I knew I was on the verge when I saw the display of Kohler’s Smart Divide sinks, which have a low divider between a two-basin sink. This was not a new concept, but the evolution to include organic forms was. That’s what really caught my eye and, more than 24 hours later, I am still thinking about it.

What I loved about the organically formed sink was how it could make a space feel more unique by either adding visual contrast to a straight counter top or inspiring curved edges in a less conventional one. I began to think about my own kitchen and how it might feel more inviting with a few curves in it. I thought about how perfect water would look in such an organic form. I thought about how easy the Smart Divide feature would make it to hand-wash those big pans and trays that never fit in the dishwasher.

I have thought a lot about that sink since yesterday morning. The fact that one of example was displayed in trend-forward Gray has made it even harder to forget. Tonight I realized that I want that sink desperately. This is true in spite of the fact that having it would trigger a cascading effect. 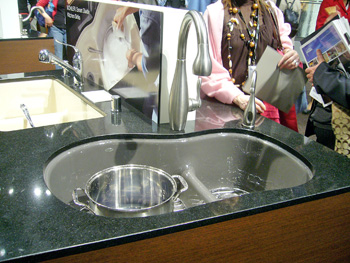 I cannot replace the sink without replacing the faucet. And why would I replace the faucet and sink but keep an old garbage disposal?  That would make no sense at all. The counter tops really do need to be updated because I want the under-mount look for the sink and that isn’t what I have now. I saw some wonderful quartz at KBIS that I think could look great in my house (I have simply seen too much granite to want it any more!). And if I’m getting a new counter top, I might as well take the opportunity to replace the cook top that is 14 years old. Perhaps I should re-do the cabinets, too? If I do that, I would really like to lay the kitchen out differently. I have never really liked the way the island works—or the lighting above it, either. I wonder what it would take to re-do the ceiling with recessed lights?

It seems obvious that the act of falling in love with Kohler’s organic Smart Divide sink will have long term repercussions—but it may be worth it to have this amazing look.  So I’ll day dream about it for a while and if I still can’t get it out of my mind by the time I get back from the High Point Furniture Market in a week or so, I’ll know that a kitchen remodel plan is in my future.