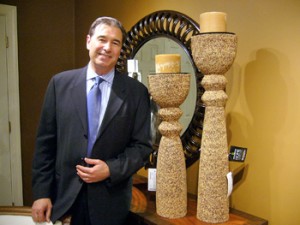 Today was launched, as every Thursday opening of market has been for years, with the AHFA Press Breakfast. Four industry leaders spoke in succession. The person who really got my attention was Allan Palecek, president of Palecek.

His topic was the eco-chic movement, which refers to products that are made from found or renewable resources that have been designed to a new level of sophistication and  style. Palecek offers lots of them, as they have for some time. A tour of their showroom today revealed new items like found wood baskets and planters, a natural vine screen and tiger shell embellishments on abaca pillows. Each of these items was more interesting, more sophisticated and more appealing than the next.  All of them are eco-chic. 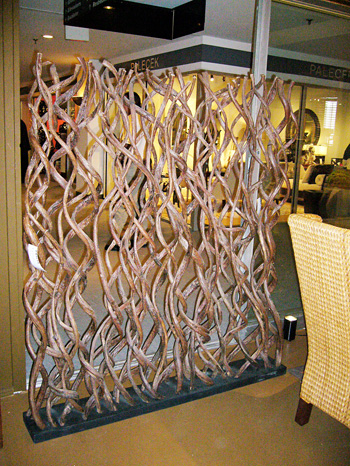 Allan insists that eco-chic can’t be a fad. Why? Because there are too many of us in what he calls the “earth community” who are concerned about our environment and committed to making a difference.  Not only that, but coming up next is a generation of young adults who, like his college-aged daughter studying interior design, are learning about being “green” and making it a priority. I believe that they will take what they learn in school into their everyday lives and act on it. Generation-Y already has a reputation for an earth-friendly approach to living. It will be interesting to see how this powerful economic force remakes the retail scene when they are all over 18.

The shots you are looking at are Allan Palecek in his showroom the Vine Décor Screen, which debuted from Palecek this week.