As natural fibers and the natural looks they provide increase throughout textiles, it only seems sensible that metallic effects and high shine would back down. But as Laura Colón Budziszewski, Staff Writer for The Trend Curve , saw at this week’s Showtime textiles, the predictable path is not always the one taken.

The metallic influences that appeared at Showtime were anything but weak. On the contrary, this type of luster made statements that anyone would call bold—and that represents a big change. In the past, metallic threads or effects were used sparingly to create a subtle sheen. This time, however, Lurex® threads, metallic foil printing, and luster appeared unabashedly throughout the showrooms.

For example, American Silk Mills’ Bedazzled textured solid had the look of thousands of tiny facets woven into the fabric, creating a sparkling effect in shades of Gold, Platinum, Silver or Copper. 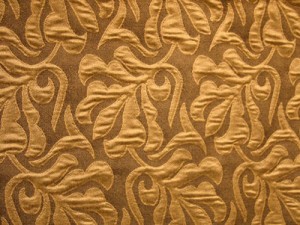 At S&D Fine Upholstery Leather, hair-on-hide was slathered with metallic paint, echoing an emerging trend from Europe in the past year. Even newer was the use of glitter on laser-cut hair-on-hide that could be as subtle or as obvious as desired, depending on whether the leather was dark or light (this has great potential for use in upscale nightclubs).

At Circa 1801/Doblin, Lurex® threads worked as accents in an emerging heraldic theme, while Gold-colored satiny sheen (played against deep hues) invoked a feeling of precious metal.  Sunbury also used luster to create a feeling of metallic shine in a raised satiny pattern in Bronze (see image at left).

This use of metallics and luster is motivated in part by formal themes that are ramping fast. So even though natural looks are increasing, these styles provide the countertrends to dry and natural feeling fibers. Both directions will expand into 2008.