Portmeirion’s Sophie Conran champagne cooler, etched with her signature and limited to a worldwide production of 2,000 pieces, was among the new collectible pieces introduced at the New York Tabletop market. But personalizing product was just one of a well-thought-out handful of strategies manufacturers took to compel consumers to purchase something while they can.

Anniversary celebrations also drove several collections. Waterford, for instance, is celebrating the 100th anniversary of the Times Square New Year’s Eve ball. To mark the event, they created “Let There Be Light” crystal giftware and Holiday ornaments (see ornament on left). They also offered several limited-edition pieces drawn from their archives, including a unique, boat-shaped bowl.

Moser also reached into the archives for several limited-edition historical replicas. They were highlighted along with a superb collection of vases, bowls and art glass pieces, also in limited editions, designed to mark its 150th anniversary. Martin’s Herend Imports, the exclusive U.S. distributor of Herend and Moser, was celebrating an anniversary of its own in New York—its 50-year relationship with Herend—with a special, limited-edition Golden Anniversary tureen and platter. 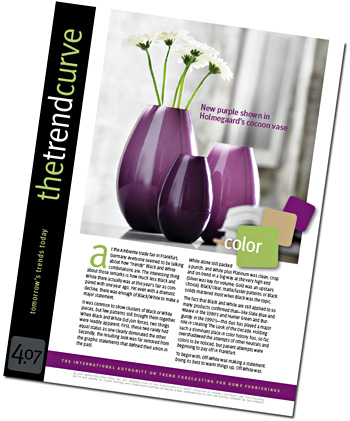 A number of companies featured annual Holiday collectibles, most notably Spode. They updated their best-selling Christmas Tree pattern, originally introduced in 1938, with the addition of the 2007 Red Ribbon border design, only offered this year. Special annual collectibles also were featured.

To order on-line go to www.trendcurve.com and click on the Trend Store link. You can also email Janice Carlson. She will process your order right away so you can start receiving all the benefits that subscribers enjoy—like Trend Flash™ email updates from every market and trade show we attend around the world, and discounted pricing on our color forecasts (our Christmas color will be released in approximately 4 weeks) and European trend reports. Or just call toll-free: 800.531.6614.