For the past several seasons, the words tiny and small have been the best options for describing designs and fabric. But introductions at the High Point furniture market indicated that this is all about to change. In a striking reversal, the newest size was large, bold and more motif-focused than pattern based. Moreover, all design categories seemed equally interested in exploring the potential of a countertrend in scale.

Even though produce-sack fabrics had less exposure, vintage accessories were going strong, and many were updated with big scale. Case in point: framed art from Elizabeth Lucas. In these pieces, blown-up elements such as script, postage stamps and postmarks seemed to be viewed through a filter. They coalesced into a blurry backdrop for a single, fully colored songbird that wore a crown, was patterned with egg-shaped spots and took up most of the visual field.

When the subject matter was classic, larger scale provided another way to infuse designs with modernity. For example, a three-drawer chest from Hickory Chair was an attention-getter with a super-wide Greek key stripe running from the top down each side of the front. For contemporary pieces, going big emphasized the graphic aspects of any design. Rowe’s contemporary watercolor floral felt more like a series of loosely associated, oversized blossoms than an allover pattern.

Regardless of the style, large-scale design meant there was more to love in every design:

There will be much more to come as the trend toward large scale ramps up throughout 2012. Expect it to dominate the landscape by 2013.

Click an image for a larger view and/or to start a slideshow: 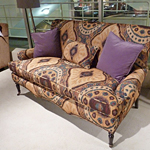