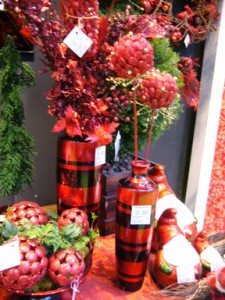 Shopping retail in Europe during the 2005 Holiday season, one of the most dramatic stories that emerged was Black. It showed up as a high end statement that was sophisticated and new. At Christmas World in Frankfurt, Germany, Black also was out in force. But this time it was shown in a range of price points, demonstrating its appeal to European consumers at all levels.

In some applications it combined with other hues in ways that looked sophisticated and forward. In others it participated in a color story that has been long established in the everyday home décor marketplace. In the same way, some lines that included Black pushed for classic themes while others took a more contemporary route. Drama was the mood for certain groups while a more light-hearted direction worked for others.

I have included a few pictures of the ways Black was highlighted for Christmas at Christmas World: