You are here: Home / European Trade Fairs / Chair of the Day at Maison & Objet 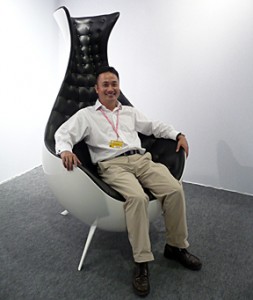 Some companies came to the fall version of Maision & Objet in Paris without any new products. What a bad idea! People who had innovative and different things to show had lots of buzz in their stands. A typical refrain from companies who did not invest in innovation this time was that they are now able to ship everything they showed at the January event. This is somehow meant to make everyone overlook the fact of no new product. How interesting that this is taking place in Europe while those of us in the U.S. keep hearing that the recession is over for Germany and France, two big economies. I can’t help but suspect big missed opportunities and soon-to-be-felt regret for the companies who came to this show empty handed.

Of course, there are still plenty of products debuting here and I saw lots of them on my first day at the show. One of my favorite items today was designed by Michael C.K. Chan for a company that is simply called The Chair.

Michael says the curve was the inspiration behind a line of leather and fiberglass chairs (with metal legs). He also says that from initial idea to prototypes took just three-and-a-half months. And for my favorite chair, there were zero total revisions to the original concept along the way. Wouldn’t it be great if every idea each of us had was right from the get-go like Michael’s was for this chair?

Take a look at designer Michael C.K. Chan sitting in my chair of the day and you’ll know why I fell for it.