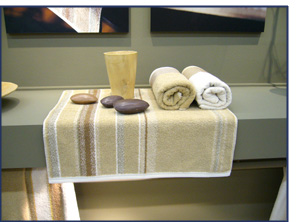 I stopped to visit at Santens N.V. today—my second trend-spotting at the Heimtextil trade fair. This is a company I really like because of their color palette and their approach to design. I also like that they were among those who embraced bamboo fibers early on. Having done well with their palette of 10 bamboo bath towel colors in Europe, they are expanding that number to 18.

To do so, Santens added light values of Misty, Lotus (a Pink-cast Lilac) and Vanille. They also added a pale hue called Grége. It fits with one of their darker bamboo additions, Moss Gray. Although they have different values, these are both complex and colored Grays. They are among several that emerged at Heimtextil to make the Gray family more usable than in the past. If you are shopping the Heimtextil trade fair, be sure to stop in at Hall 5.0 A 58 to see these colors.

By the way, I plan to write more about the myriad of Grays I saw throughout Heimtextil and their significance in our Trend Album™: Heimtexil 2006. I’ll write about the other color families as well, but Grays will have a special focus this time. You can pre-order by sending an email to Cathy De Bono asking to pre-order the Heimtextil Trend Album.

Above is a picture of another color story that Santens called Back-to-Nature. These are the kinds of Earth Tones that were repeated at this year’s fair.