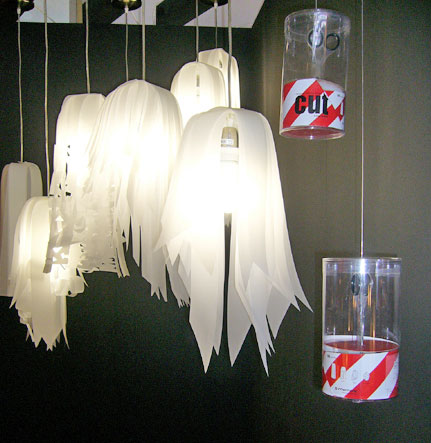 Maison & Objet is not a lighting fair, but lighting is one of the categories that can be seen in both Hall 5B and Hall 5A. This year, lighting in both halls offered a notable increase in the use of LED’s, primarily for portable fixtures. There was also plenty of whimsy.

Today I stopped at Innermost because of a vinyl-like lampshade that fit with a trend toward synthetics that is building for home. Around the corner from it was a pendant that is as whimsical as anything I have ever seen.

The Cut lamp, designed by Austrian Monica Singer, comes packaged in a clear plastic cylinder where the prominent visual is a pair of scissors. You can decide how to cut the White strips that make up the shade to personalize your lamp once you get it home. Innermost hired a hairdresser to snip the lamps on display. I wish my picture had turned out better!  You can still get the idea and a sense of the fun.

This lamp won the Best Product award at Maison & Objet and Best New Light at the Birmingham Autumn Fair.