You are here: Home / European Trade Fairs / Dillon and Jada at Maison & Objet 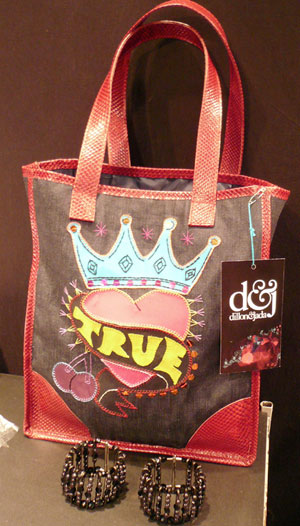 Wendy Visser’s designs are a bit edgy, so I thought I would have remembered them—or at least the style—had I seen them before. But I hadn’t. This was Ms. Visser’s first time showing at the Maison & Objet trade fair.

Her company is called Dillon and Jada, named after her two children who are five and four years old respectively. Visser has been in business for eight years, with products placed in upscale locations like Harrods and MOMA. But the collection I saw today was completely new.

It consists of T-shirts, skirts, bags and jewelry that feature Western counter-culture themes with an African point of view. The clothing and bags include a busy collection of hand-applied motifs like crowns, hearts, birds and skulls, and words like True, Free and Punk.

The designs, based on 1950’s tattoos, are embroidered by Congolese women who also add semi-precious stone embellishments. Her jewelry, made of semi-precious stones, is assembled by Zulu women in the poorest region of South Africa, where her company is based.

There is nothing like this at Maison & Objet, so Dillon and Jada certainly stands out. But Wendy Visser’s company also stands out in my book for putting women to work who are poor, widowed by AIDS or left behind when their husbands leave to work in the mines. If you are shopping the fair and have a chance to see this product, it’s worth stopping by. It’s in Hall 6, row B4.