You are here: Home / European Trade Fairs / Even Roosters Need an Update 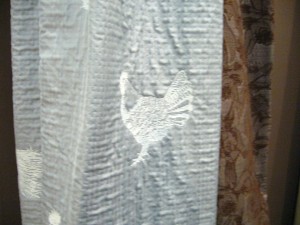 I don’t really appreciate rooster motifs yet I understand that many people do. They like them in folkloric country themes that translate into whimsical kitchen towels and table linens that have been around for years.

I think it is a different customer that is attracted to roosters for their role in Country French vignettes. These roosters are typically colored with a little less intensity, and even feel comfortable dressed in Black and White.

If you happen to be one of the rooster lovers, you will be happy to know that the Heimtextil trade fair in Frankfurt, Germany had products this time for YOU.

Hartex NV showed a mid-tone Blue fabric in drapery or pillow weight with an intricately stitched rooster done in a tone-on-tone look. Puckering made a perfect go-with texture for the ground. This rooster had a dressy feeling and, colored as it was, looked like a great Country French fit. A picture is shown above. 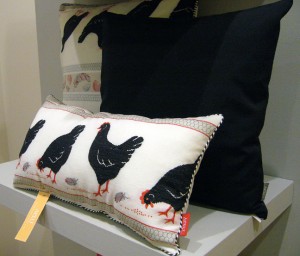 Rico Design kept with a kitchen-like approach to the style, but found ways to integrate trend-forward paisleys into the mix. Their table cloth featured paisleys not only floating in the ground, but also standing in for the rooster’s wing.

Apelt featured a rooster pillow with all Black roosters accented with Orange. A companion pillow came in the same solid Black that seemed to go with everything at this year’s fair. Look left for a picture.

If I had to pick one rooster to take home, the more sophisticated Hartex version would win hands down. Bit I think all three companies did an excellent job of adding on features that bring an ongoing theme up to date.