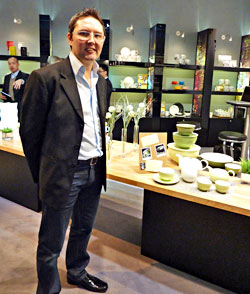 A company called Loveramics that I visited at the Ambiente trade fair in Frankfurt, Germany was well worth the stop. A collection of pieces designed by Simon Stevens, called Er-Go!, came in a series of three great-looking Greens. This trio of Greens, used together, brought home dual messages. First, it reinforced the idea that after some time out of the spotlight, Greens are on the move once again. Second, it confirmed that the use of multiple types of one color family is growing. And while using plates as covers for bowls and cups is nothing new, doing so in this group confirmed that multifunction has hit the mainstream. It is a must-have in every collection that can do it. 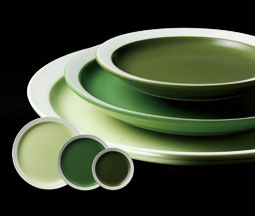 The photo at left is of the designer with his product, and the other highlights the three Greens he used in this line.

I’ll create a major trend report from the Ambiente trade fair called Trend Album™ Ambiente 2010. Subscribers to The Trend Curve can preorder at discounted prices by emailing Janice. Non-subscribers will need to wait until the general release, which will be in about 2 weeks.