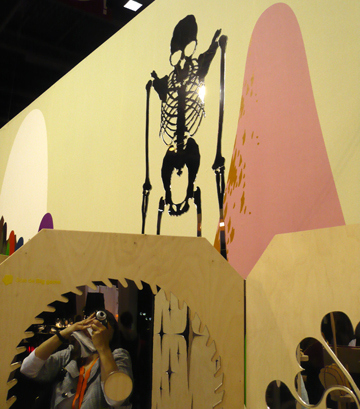 Here's an accidental snapshot of me taking a picture of mirrored stickers, which were quite new.

The Maison & Objet trade fair in Paris, France was fabulous. After three days of trend-spotting for what’s coming in the near term and digging for what will follow further out, I have vowed to add another day to my schedule for the next show in January of 2009.

There were notable color shifts and changes in texture. A shiny new fabric took center stage and embellishments evolved in amazing ways. I’ll write about all of it in a full trend report, including about 150 images, called Trend Album™: Maison & Objet, September 2008.

If you already subscribe to The Trend Curve™, you can pre-order this report at a special price that is below our everyday price until September 18. After that date you can still pay $100 less than non-subscribers. Call Janice (800.531.6614) or email her (Janice@trendcurve.info) for details.

Next up: the ABC Kids Expo in Las Vegas.