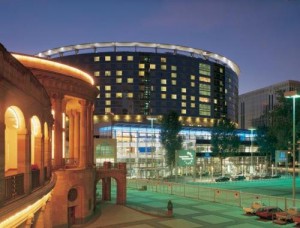 I found my Frankfurt Hotel quite by accident in about 1994. I had reserved accommodations at another hotel in the city not knowing that a renovation was going on. After one night, I left—without another place to stay. I had no idea what a dumb move that was during one of the fairs at the Messe. There are rarely rooms to be had close by during those events.

I was lucky to find a hotel located just a few blocks from the fair grounds. Its proximity, I have told myself in the years since 1994, is this hotel’s best feature. This alone is why I return at least three times each year to stay during Messe Frankfurt events. An easy commute each morning and night overshadows everything else. Still, there are several features of the hotel that are less than ideal.

I do not particularly like the rooms, which have always seemed too hot. I have never been a real fan of the dinner menu that always has too many sauces for a Mid-Westerner. And the entrance to the hotel has six steps, not a ramp on which I can roll my luggage when I come and go. So when my colleague John Currie could not get a room at my regular hotel during the Christmas World fair last month, I agreed that we would both stay elsewhere.

John found the best location ever. The Maritim Hotel is not just close to the fair it is connected to it. They have bellman who fetches your luggage from the cab. Their accommodations are roomy by European standards. There is more than one restaurant in the place. And they have Wi-Fi. Of course, the rate was more than 100 Euros per night higher but it all seemed worth it at the moment. By the time Christmas World was over I had committed to myself that I would honor my current reservations for the old hotel through the end of this year, then switch my allegiance to the Maritim for 2007.

The place has been refurbished and is really quite well done. A sweet young woman at Check-In brought me a cup of green tea while I waited for my room to be cleaned (I arrived before 8:00 this morning). Once in the room, I heard a knock at my door. It was the maid who had remembered that I prefer a blanket to a feather bed and brought one for me. I slept under it for a few hours, then grabbed my laptop and went to work. What should I discover but W-LAN (Wi-Fi) available on my floor. When I took a break and stopped in the restaurant to see about a dinner reservation for tonight, both the captain and my favorite waiter greeted me by name and welcomed me back.

The room is still a bit hot. I didn’t much like the sauce on my salmon tonight but I balanced that with the knowledge that this hotel has the best breakfast of any European hotel in which I have stayed. This hotel is not perfect but I feel at home here. And when I travel as much as I do that means a lot—maybe even more than having the closest possible location to the fair. I guess I’ll pass on the Maritim Hotel for now.