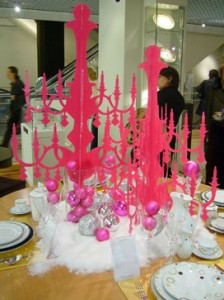 While chandelier ornaments for the Christmas tree are post-peak this year, chandeliers in seasonal visual display are not. That was clearly the message in Europe. In each of the cities I visited there last week (Paris, Hamburg, London), chandeliers were an important part of Holiday style by virtue of their role in decorating stores for the Christmas selling season. They were also important lighting choices for décor.

Chandeliers have traditional roots, but only a fraction of the ones shown in displays or for sale could be called traditional. Instead, they only alluded to a traditional mood. Multi-colored glass used together provided an important update. Two-dimensional representations of classic forms offered another interpretation that was as right for everyday product as it was for seasonal store fixtures.

Two-dimensional chandeliers used in displays at Galleries Lafayette’s tabletop area looked like elaborate silhouettes caught in a state of suspended animation. These light-less fixtures hung over dining tables in opaque Pink or transparent Red to make displays more decorative and dinnerware seem more festive. These pieces looked so great that, had they been for sale instead of for ambience, I’m sure many people would have been interested in buying them. 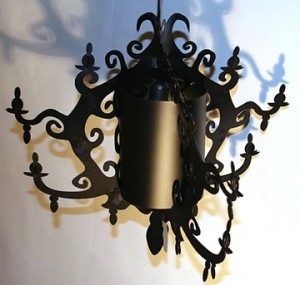 In spite of their bright color, these display fixtures reminded me of some wonderful Black or White lamps I saw at the Maison & Objet trade fair in September. Designed by Claire Requa and distributed by Accent, pieces like the simple, elegant and beautiful lamp to the left hearken back to a classic and romantic era while making a contemporary statement.

Another approach to chandeliers in Europe was equally compelling: making a chandelier from something completely unexpected. Habitat in Paris probably had more fun with this idea than any other retailer. At their Montparnasse store, magnifying glasses were hung in tiered circles to create a chandelier that was both whimsical and mo 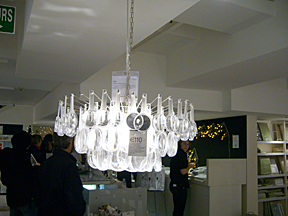 dern. At Bon Marche, a chandelier was printed in a single color, then cut out so the resulting two-dimensional décor item became a trompe loeil that provided no light at all.

All of these contemporary variations are willing to pick and choose aspects of tradition that work for them and leave the rest behind. That’s an approach that matches perfectly with today’s consumer’s mind-set. That’s why chandeliers like these are forecasted to remain strong for the next two years.