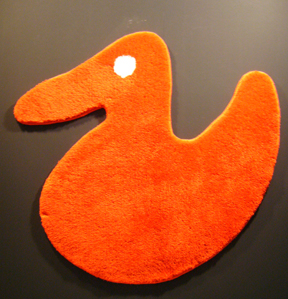 Some of the shaped bath rugs shown in the stands at Heimtextil (the world’s largest trade fair for home textiles; it takes place each January in Frankfurt, Germany) were eye-catching because of embellishments like crochet appliqué flowers, added here and there by Atenas M. Redondo Broto, S.L. or Dempa Denizli Mensurcat Sanayi Ve Ticaret A.S. Others had to be noticed for their textures. This was especially true for companies that featured long, high pile, shaggy faux fur motifs or metallic accents. Others were standouts because of their whimsical shape.

Novelty rugs were clearly in the minority this year. In a conversation in their Hall 5.0 stand, Jean Alan N.V. revealed that their business today is weighted heavily toward rectangles, with about 80% of their sales in this shape alone. Rounds, squares and novelty shapes together make up the balance. Still, it was the rugs with unique forms that screamed for attention throughout the bath area. 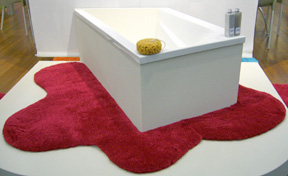 Companies like Batex GmbH pursued motifs-as-forms in rugs for kids like the duck you can see above and at the left. Jean Alan’s take on a whimsical shape had a more mature feeling. It came in Earth-tone colors with classic-inspired scrolling elements.

I also liked an option Jean Alan has offered for some time. This larger rug is cut to surround a bathtub rather than simply sit in front of it. Why not add an interesting shape to an otherwise mundane situation?

I’ll examine shape in more detail in our Trend Album™: Heimtextil 2006, due to ship before the end of this month. It will include trend headlines and more than 100 images to show you the trends. Subscribers to The Trend Curve™ can email Cathy De Bono to pre-order at special subscriber prices. Those who do not already belong to The Trend Curve family can pre-order as well at non-subscriber prices.