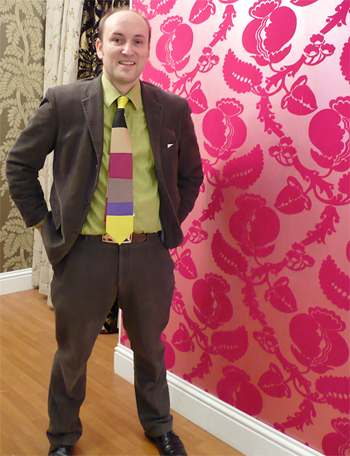 It seemed like there were fewer wall covering companies exhibiting at this year’s Heimtextil, the huge trade fair in Frankfurt, Germany where I have been trend-spotting for the past two days. If that is the case, there seems to be a bit of a lag between trade-show attendance and the return to wallpaper that The Trend Curve™ has been forecasting for the second half of this decade.

So I set out this morning to ask a few prominent people whether they thought I had been dead wrong. The consensus is NO, my forecast was right. And after a few seasons of limping slowly along, wall coverings are finally beginning to catch on. 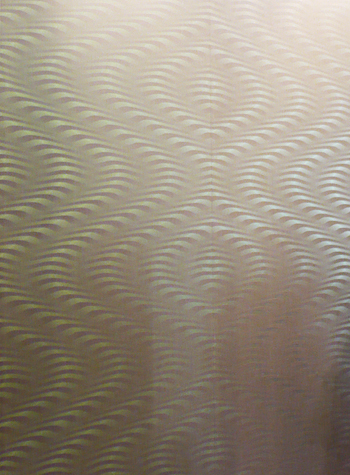 At Anna French, for example, designer Jonathan French showed me his fabulous new wallpaper with a flocked texture. The base is a non-woven, not paper, and that makes it easier to put up and take down. He says that big, bold wallpapers like the one he had displayed in the stand (my picture of Mr. French with his new creation is included so you can have a peek) are the best direction. This pattern is part of the Company’s first big wallpaper collection in five years.

Jonathan French’s design was just one of several I fell for in Frankfurt. I loved an optic design at Marburger Tapetenfabrik, for example, and a classic motif done in Brown flock on a Mustard ground at Industrie Emiliana Parati. And I was head over heals for the giant cutout wall stickers from Plage France. They represent a trend that is catching on slowly in the US, but will hold on for some time once it finds its way to the mainstream.

If you are a subscriber to The Trend Curve, Janice is just about to send my Trend Flash™ from the Heimtextil fair so watch for it on your desktop shortly. For lots more detail about the color, texture and design trends from this important event, be sure to order Trend Album™: Heimtextil 2008. It can only be pre-ordered by subscribers to The Trend Curve until the end of this month (one of many subscriber benefits — especially the discounted pre-order price!). On publication day this trend report will be available to buy through our Trend Store. Just visit our web site, then click the Trend Store link to buy Trend Album™: Heimtextil.