There are lots of color and pattern shifts at the Ambiente trade fair in Frankfurt, Germany. I will write about them in next issue of The Trend Curve™, as well as in our Trend Album™: Ambiente 2006 (you can pre-order your copy by contacting Cathy DeBono; I estimate a release date of February 28). But I will not write about key items in either of those publications. That’s why I am going to write about a couple of items I want everyone to know about today.

Kiss is the unlikely name of a German company that sells a handful of unique items. They carry several memorable wallpaper designs (wallpaper is a hot trend at the high end, carrying the accelerating interest in pattern onto walls). They sell some sort of lighted toilet seat that I asked not to be shown. And they also carry a line of lighted and colored rocks for the out of doors under the name Wisdom. 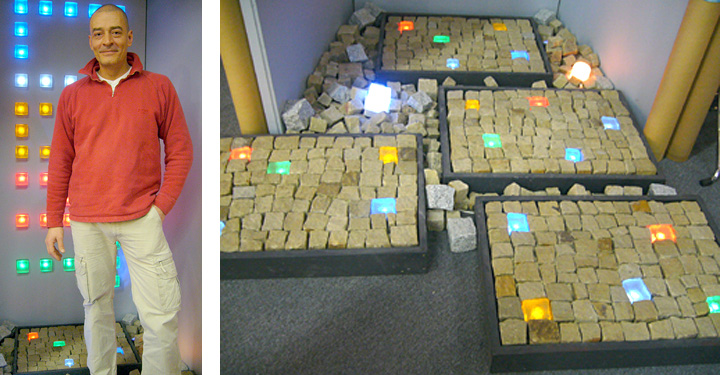 Why Wisdom? It comes from a German tale about the stone of wisdom. While Germans can see the connection quite easily I suggested a new name for the time when designer Wolfgang Marhoff markets these in the U.S., which I’m sure he will. 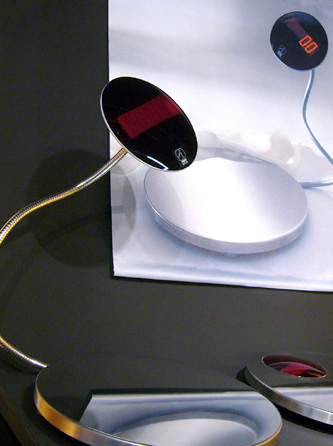 Although these pieces are called stones they really look more like blocks of ice. Each one comes in a not-quite-square or not-quite rectangle that is irregularly formed and lit from within. Choose one of five colors (two of them are Blues) or mix them all among the real rocks in your outdoor patio/path/garden edging. Do you live where it’s cold? Don’t worry about whether these LED based lights (that means the light source is not only small, but also ultra long-lasting) can hold up under severe weather. They can handle temperatures that range from minus 40 to plus 70.

With all the attention being placed on outdoor environments, a product that is practical, colorful and quite new has lots of potential.

Schönbeck Design has lots of products that have made me smile when I have seen them. Today I saw one that made me shake my head in wonder instead—wondering why no one had done it before.

The item is a scale, but no ordinary one. This one’s read-out is on a goose neck that can bring the bad news closer to where those of us who wear glasses for near-sightedness can read it. The LEDs in the digital read-out are Red. Somehow that makes it seem that any number it showed would somehow be shocking. But those numbers are big and I think that is a very practical size given the function. I would buy one of these scales in a minute.