You are here: Home / European Trade Fairs / Upping the Shine in Paris

The Maison & Objet trade fair has a peculiar rhythm. It takes place in January of each year, then again in September. It’s nice to have the nine month break between the January and September dates, but between September and January, the number of introductions can be fewer. That was certainly the case in many stands this time, where manufacturers explained that they have been so busy filling orders from last September’s new introductions that they did not have time yet to create new designs for this fair. 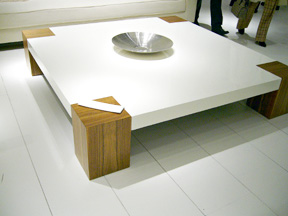 Still, there is plenty of newness at the January 2006 event. I have just completed my first day at the fair and I can already see that many introductions support an increase in the amount of luster and shine on surfaces both hard and soft. It is being created by everything from plastics to polyester fibers to MDF and lacquer.

In furniture, a contemporary lacquer look was new in a lightened palette of Off- White plus wood accents in a light medium stain from Baltus. They also combined a Linen color with dark, wenge stained oak for another take on a modern life-style. Yet equally compelling were laser cut floral doors on a vanity from Bitowa, a Japanese company showing for the first time in Paris. 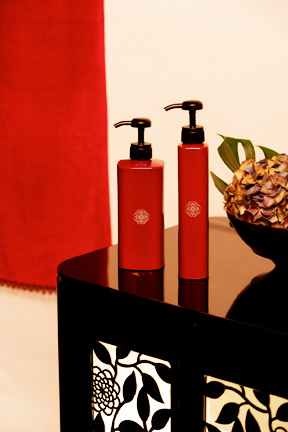 The floral’s lacey personality was made more dramatic by the designer’s choice of Black for the entire exterior. She played that against White covering the inside of the doors. The piece itself is space saving and quite clever: a vanity and small velvet covered stool that fold up tight to look like a small chest.

The designer, Kanaé Tsukamoto, was on-hand in the stand. She has worked for Mitsubishi Electric and the Royal College of Art in London and is now in her own Tokyo-based design studio where she has already picked up design awards for her products. If you are in Paris and at the fair, look for her vanity in the Bitowa stand in aisle A.

I will be spending another day at the fair tomorrow. John Currie, a member of our editorial team, is also in Paris. We will have much more to say about the fair in the next issue of The Trend Curve™, but before that, our Trend Flash™ will be sent via email to subscribers. If we do not yet have your email address on-hand, be sure to email Cathy De Bono so she can update your records. Our Trend Album™: Maison & Objet January 2006 will be ready quickly after we return from Europe. You can pre-order with Cathy so yours is among the first of these CD-ROM trend reports to be sent when the product is released.