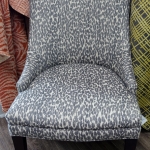 Animal-skin looks are a constant for home interiors, and they can be found at every price point. But every few years they also hop onto the bell curve for trend. Introductions at the recent Showtime upholstery textiles market indicate that the market is about to embark on another trend cycle for animal skins. They will be found in printed fabrics and in woven ones. They will also show up in a range of scales, from medium to large.

What makes the newest crop of animal-skin looks so compelling is that they aren’t the same-old-familiar spots and stripes. The newest versions have been modified in some way. Big-cat spots, for example, only allude to leopards, jaguars or cheetahs. Examine them more closely and they are seen for what they are: water drops, brush strokes or amoebas.

Stripe and snake skin designs similarly adapted. They are textured, pixilated, patch-worked or suspended over an unexpected ground, like a herringbone.

Skins of all kinds are given dimension to make them stand out. Alternately, they may be worn away to make them recede. Metallic effects add unexpected luster, while color stories are as creative as the designs themselves.

And what about traditional animal-skin patterns and their natural color stories? They should never be abandoned. For the next 28 – 24 months, however, modified, adapted or abstracted animal-skin looks will made a trend statement that typical skin designs cannot.