You are here: Home / MEMBERS ONLY / Member-Only Posts / Contrast is White Hot 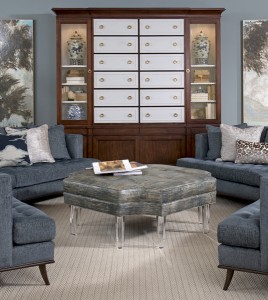 The market’s fascination with minimalism is coming to an end, as we wrote in the December issue of The Trend Curve (see Goodbye to Plain). Why? There are a number of reasons, including simple fatigue, the trend toward textures and an improving economy that is pushing for newness.

Mixed-media hybrids, one of the signatures of post-minimalistic décor, are building in a range of categories. So are fancy veneers, exotic species and complicated inlays that add another layer of interest to wood pieces. A revival of embellishments has begun, which includes tapes and trims that have been off the trend radar for years (see the blog post Rethinking Trims).

For 2016, add another step away from minimalism: high contrast, with the newest version focusing on pure white.

Especially for furniture, this white feels quite unexpected. It is not a warm country white or a glamour-inspired off-white. It is clean, bordering on bright. It is optimistic and intentionally obvious. And it has no precedent in the past. 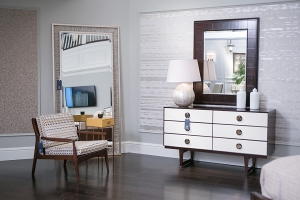 At the recent High Point furniture market, crisp white teamed with dark-stained wood and pen shell for a fresh take on contrast that feels right for 21st-century décor. It updated styles from New Traditional to Contemporary in an incoming trend that will have more exposure as 2016 unfolds. Here are a few high-contrast pieces from Ambella Home (above), Caracole, Century Furniture, Global Views, Henredon, Palecek, Stanley Furniture and World’s Away.