In a market representing furniture companies from all over the world, new silhouettes were put on the back burner as major manufacturers trimmed costs and introduced less product. Yet, despite the cuts some strong new directions in shape emerged. 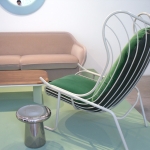 Jaime took inspiration from the curves of musical instruments

Jaime Hayon’s Beetly sofa and Arpa chair were based on the lithe curves of musical instruments, including violins, harps, and flutes. Honeycomb structures appeared on wall surfaces, storage units, and as the Cloud desk by KLAchitekci. Cubes were stacked, etched, printed and assembled on both matte and shiny surfaces. Designer Ferruccio Laviani introduced Twaya, a dining table with a faux draped tablecloth, for Emmemobili. Sofas and armchairs from several companies looked bigger due to their ever-larger scale and puffy channel quilted slipcovers.

Oki Sato, founder of Nendo was the most talked about creative at the show. His Zabuton chair for Morosso reinterpreted traditional Japanese floor cushions as a futon-shaped lounge chair that was folded and tucked with thick cushions that draped over a metal wire frame. The asymmetrical sensibility of this chair was its most-compelling feature. 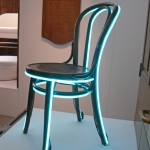 Another talent in the spotlight, British designer Lee Boom, showed crystal-cut light bulbs and neon-lit chairs that glowed in the dark. The biggest name in Milan was Philippe Starck, who paired up with celebrity rock star Lenny Kravitz to reissue six Mademoiselle chairs, draped with faux python and fur for Kartell. 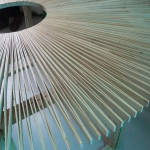 Transformation was the idea behind the Fan table, by newcomer Maurice Affonso. The designer took inspiration from a classic gate-leg table, turning it into a slatted-repeat surface, with an array of different shapes and sizes to suit the occasion. 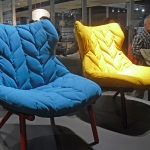 In textiles Patricia Urquiola’s indoor-outdoor Husk chairs for Kartell were standouts with chair covers that looked like puffy leaves with voluminous quilted surfaces. Also important were oversized nubby weaves and knotted leather at the Plusdesign Gallery in the Lambrate design district.