You are here: Home / MEMBERS ONLY / Member-Only Posts / Mixed Media’s Secret Weapons for 2017 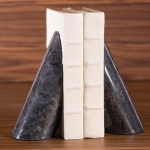 The rapid growth of mixed media reveals that this will be among the most powerful, long-term décor directives for the second half of this decade.

Consumers are embracing mixed media as a way to differentiate today’s interiors from those of the past. To make the distinction even more pronounced, those consumers are gravitating toward materials that have never had much traction in décor (think paper), or haven’t been seen in a long, long time (marble).

For the next 2-3 years, unusual combinations and secondary substances will be the secret weapons that keep mixed-media combinations on-trend. Here are just a few second-string materials to keep your eye on:

Marble provided a healthy on-ramp for semiprecious stones. Yet, an increasing interest from mainstream consumers in the energetic properties of natural elements has done nearly as much to move quartz, amethyst, agate, malachite and magnesite into more applications than ever before—like lighting (Studio A, Arteriors), boxes (John-Richard, Global Views) and picture frames (Emporium Home).

Mother of pearl:
This rich-and-lustrous material inched ahead in placemats from Dransfield and Ross, where it combined with directional blue-stained wood. A drinks table from Century, made from reclaimed buttons, showed how mother-of-pearl combines beautifully with metal.

Paper:
Paper made its way to décor via digitally printed patterns on John Strauss’ Lake Shore watercolor console. Go Home and E. Lawrence Limited, showing at J. Douglas, made books into décor items, coloring their spines to show them off or printing new imagery on the outside. Natural Curiosities showed framed art called Cooking The Books, consisting of rows of pages that looked ripped from books. Oliver Gal used books as the subject of framed art.

Vellum:
Thomas Bina, showing at Resource Décor, covered drawer fronts on his new sideboard with vellum. This high-end material was combined with polished stainless-steel and ebonized peroba. Alden Parks showed a distinctly patterned vellum box that can be used alone or as an end table when placed on a sleek brass stand.