You are here: Home / MEMBERS ONLY / Member-Only Posts / My Little Cabbage 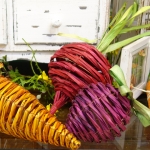 After decades of cartoon dogs, cats, bears and other forest creatures posing as loving couples on Valentine’s Day cards and wedding-anniversary greetings, it’s time to consider the charms of personified vegetables. Yes, we believe it’s Farm-to-greeting-card time with a lighthearted French-country flair. And, while vegetables can hardly be considered cuddly, they certainly have plenty of potential for being cute and even provocative.

Mon petit chouchou not only means my little cabbage in French, but also “my sweetheart.” And the possibilities for romantic repartee just blossom from there. For instance, when a couch potato meets a hot tomato, it’s ooh là là legumes! Try as they might to stay as cool as cucumbers, you can bet a dozen rose radishes will be ordered and amorous feelings are about to mushroom. 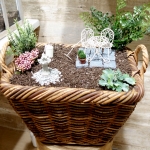 We recommend French fonts (think Gessele Script or Je t’aime) for veggie greetings, as corn stalks declare, “When it comes to you, I’m all ears!” Meanwhile, sweet potatoes and leeks team up to say, “I’m letting it leek: I’m sweet on you!” Keep sentiments light and amusing, introduce red peppers to spice things up, and add romantic touches like scrolling motifs evocative of ice-cream chairs, casual florals and simple toiles for a winning new approach to amorous occasions.

We have more ideas for you in our upcoming Spring Forward™ color-and-trend forecast. Members of The Trend Curve’s subscriber family can email janice@trendcurve.com to preorder.