You are here: Home / MEMBERS ONLY / Member-Only Posts / Out of This World 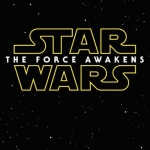 Hype over the Star Wars movie to be released has everyone interested in what’s next for the solar system. Licensed Star Wars apparel, joined by myriad space-travel themes for both boys and girls, is setting up space up as the next extreme adventure.

These influences have already shown up in kid’s clothes for fall/winter last year and spring/summer this year. Now the same inter-galactic details are emerging for décor items like space-helmet mirrors, bedding with astronaut designs and an endless number of baby designs with stars. 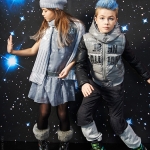 For home, the heavenly bodies pop in dark and dramatic colors. For interiors and apparel, black grounds intensify planetary color schemes. While sparkle, iridescent, and glossy techniques enhance the cosmic trend.  The galaxy is gender neutral – both girls and boys are influenced with the patterning and colors. Out of This World style points:

-Glow in the dark treatments are important for star patterns, planets, and little space creatures

-The marbleized patterns of the planets add new textures and colors

-Stars remain hot, even for the youngest years; little girls will mix in glitter and shine