You are here: Home / MEMBERS ONLY / Member-Only Posts / Speaking of Color

Color trends that emerge at Showtime can develop into key trends at the High Point Furniture Market. That makes Showtime an important trend indicator. Contributor Susan Andrews made these observations from the April Showtime market. 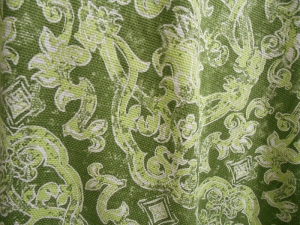 The Showtime textiles market confirmed that blue is so entrenched and beloved in the home furnishings industry that it can be considered a neutral. Whatever colors are coming on, they always play with blue, including the trend-forward green color family and a range of updated oranges.

The freshest color family at Showtime was green. It appealed as a pale tint that works as a neutral, as a happy mint and as a deep, jungle-inspired jade – but above all, as a grassy mid-tone value that struck a new chord.

Whether pale and neutral, or intense and jewel-like, greens were highly organic and nature-based. This included a yellow-cast olive that was judiciously used in designs to impart the midcentury-modern overtones that are now firmly established.

In general, organic, mineral-based blues and greens were strong throughout.

Robert Allen asked its customers to vote for their “color of the year” and the winning color was blue (surprise!) so the company obliged with many versions of that favorite. A bright navy called Calypso was created and accented with warm cognac brown and amber gold, for a rich effect.

Shades of golden bourbon-like browns and orangey golds were frequent counterpoints to blues. Although classic blue-and-white matings were in evidence, the newest direction shifted from stark white in favor of linen and cream. These duos supported a broader trend toward organic and natural influences, as well as the overall warming of the palette.

Orange had to be noticed, too. Buyers were looking for shell tones and pale coral, which were abundant. Orange was also influencing red, from sun-dried tomato to a deep shade that evoked the ink of henna tattoos.

Though it seemed somehow counterintuitive, metallics, like neutrals, were going warmer – the little glints of Lurex® in woven good were often gold as were metallic effects added to prints. 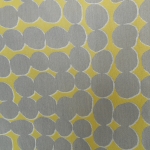 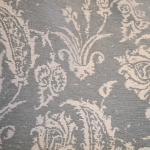 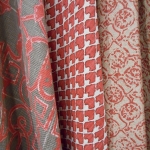 In its third iteration, Home Fabrics’s Metallic Remix collection included a focus on midscale geometrics like hexagons and honeycombs – colorways were fashion inspired and based on semi-precious gems including citrine – a trend seen recently at Maison & Objet and Proposte in Italy – as well as a not-too-sweet blue topaz to work with warm golden-toned neutrals and a feminine rose quartz that pairs with pewter.