The Story Continues from The Trend Curve™ February 2012 issue:

Many of the color trends at the Showtime textiles market were an intensification of the directions found at the High Point furniture market a few weeks earlier. For example, the interest in gray remained intense. Makers like Sunbury revealed that they are still getting new requests for grays. J.B. Martin added grays to their wool flannel collection. DeLeo said that grays, which were considered colors just a few years ago, are now viewed as neutrals. That makes them more appealing.

Valdese Weavers confirmed that grays from light linen to charcoal and graphite are all selling well. This company believes that grays have replaced browns on the must-have list of neutrals. Yet at the same time, Home Accent Fabrics and others indicated that after multiple seasons in decline, browns are beginning to trend up again, and they added browns to their newest collections. 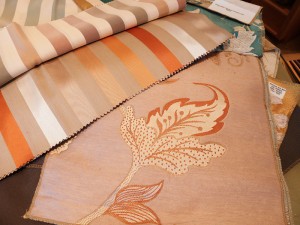 Orange stood out at American Silk (click for larger view)

More evidence of an upswing for brown was found in two shifts. First, in the midst of so many cool grays, warmer types emerged, pushing closer to brown in shades with names like pewter. Next, browns themselves had more visibility than they did even six months ago. Swiss Chocolate, Toffee and Espresso were in the mix at Circa 1801. At Laura & Kirin, Chestnut was the brown of choice. Robert Allen Group showed off new Truffle.

Citron green showed up everywhere. Gray and/or brown served to calm it down, making it a more reasonable choice for interiors in spite of its edgy nature. These neutrals had the same effect on yellow, whether it was similarly intense (this type of yellow was out in force) or a soft, buttery hue (much less visible but directionally appealing).

Brown and especially gray also kept oranges from overpowering. That said, orange was as likely as either neutral to be prominent within a design, or to appear as a solid. Just as important was the appearance of orange in every style category. This is a major advance for a color family that was recently relegated to accent status. Now it is filling the trend role that belonged to purple less than a year ago.

Another top orange companion was peacock. This color, which was also given names like Dark Laguna, is not at all new, yet the market has refused to let go of it and there was a hearty increase in new offerings at Showtime. This was true for both saturated and mid-tone versions. 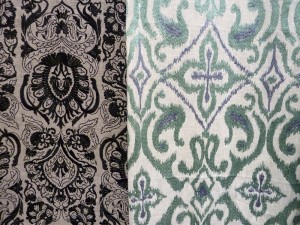 But there was more color at Showtime than just the established trends. Navy was growing, along with a noticeable number of red-cast mid-tone blues. Black took a step forward and looked particularly good as a ground for modern floral designs (no cabbage roses here!). Hot pinks stepped back, but mauve types hinted that they might do more in the future. And mid-tone values rose significantly.

At Home Fabrics, a frosty mid-tone green took up where spa blue left off. American Silk’s mid-tone was more saturated, like spearmint. Belle Maison’s cool mid-value green was the ground for a classic gold medallion, while a mid-tone evergreen worked into a lovely embroidered ikat at Patara Silks. Moore & Giles’ deep winter pine leather was getting a good reaction. These greens are doing more than balancing citron and Anjou colors. They are paving the way for a majority statement for cooler greens by 2013.