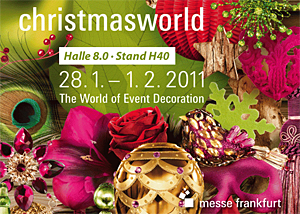 Trend Flash emails come exclusively to Members of The Trend Curve™ subscriber family with immediate updates from major markets and trade shows around the globe. Michelle Lamb, Editorial Director for The Trend Curve, is in Frankfurt, Germany for Christmasworld 2011, a very important seasonal show. Her top-line trends are below.

For The Trend Curve’s most-detailed account of trends from this must-see Christmas show, pre-order Trend Album™ Christmasworld 2011 for ONLY $275 before its release. (Regularly $375.00 for Members/$475.00 for Non-Members).

HOW TO PRE-ORDER Trend Album™ Christmasworld 2011
We’ve put together a pre-order reservation form which you can complete and your pre-order will be sent to us.

MATERIALS AND TEXTURES
– Metal mesh started to expand
– So did cut and folded paper
– Felt remained trend-right, but scale became an issue
– Knit remained a top textiles texture
– Layered finishes created a new view of color, metallic and pattern
– Dimension was more pronounced than before
– Wood figures got dressed up—literally

PATTERN AND THEME
– The word SIMPLE kept coming up in conversations about form and pattern
– Icons looked newest when contained within another figure
– Plaids could not be stopped
– Photos had real emphasis
– Pigs popped up everywhere, sometimes with wings
– This was the year for anything folkloric