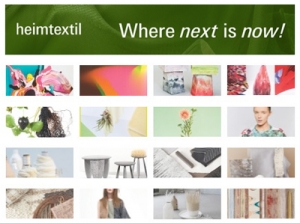 Trend Flash emails come exclusively to members of the Trend Curve™ subscriber family with immediate updates from each market and trade show we cover worldwide.
Elaine Markoutsas, Editorial Correspondent for The Trend Curve, was in Frankfurt, Germany for Heimtextil. Her top-line trends are below. The next issue of The Trend Curve will have much more to say about the trends from this important European show.