You are here: Home / Michelle Lamb / Lucy, The Sequel 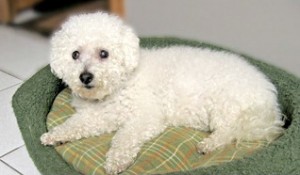 So many people have written to ask about Lucy, the cute little seven year-old Bichon Frise I wrote about in my January 3 post, that I thought I should add an update.

Lucy came to us from Southwest Animal Rescue as a foster pet. Our mission was to get her adjusted from having been surrendered by the family that owned her for two years and prepare her for the second adoption in her short life.

When we first saw Lucy, we thought she would be with us for a week. She wasn’t.

Lucy, it turned out, had a bladder infection that caused her to soil the carpet in every room of our house. She was quiet and didn’t eat much because—as we later discovered—she had an infection in her gums from poor dental hygiene, and a cracked tooth as well. We didn’t know that she was in too much discomfort to play or even to interact with families that came to meet her and consider adopting her.

Lucy was in no condition to go anywhere.

We took Lucy to a series appointments with the vet. On the first, she screamed and cried but finally could be examined. Over the course of several weeks Lucy had X-rays. She had antibiotics. She had her teeth cleaned and one of them was extracted. She had a bath.

We gave her expensive food, healthy treats, walks morning and night and the run of the laundry room (after just so much carpet cleaning we finally got smart). She had the companionship of Winston, our family dog and she had lots of love from the kids especially, but really, from Steve and I, too.

When Lucy arrived, she slept in the new bed our daughter bought for her, happy to be left alone. Six weeks later, she was sleeping in our daughter’s bed, along with Winston (I don’t know how Biz got two dogs in that twin bed and still had room for herself, but somehow it worked). Lucy went from threadbare to a thick coat of fur. She graduated from fearful interaction to confident member of the household. She asked to go out. She asked to be held. She played with her toys and with Winston. She ate like a horse.

In short, Lucy was nursed back to both physical and mental health.

Lucy was adopted last week by Roger, an older, single man. Roger owns another Bichon, Lulu, so Lucy will still have a playmate. It was harder than we thought it would be to let her go. The kids both sobbed for two days before they could talk about her without crying. They did not want to lose Lucy, but at the same time, they feel a sense of pride and happiness about what they did for her. So do I.