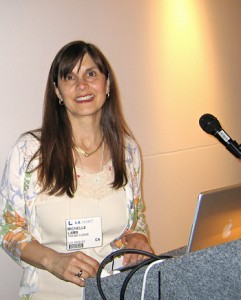 I enjoyed part of my Saturday at the LA Mart. I had been asked to give a talk to LA’s top “bleeding edge” retailers about what’s next for home furnishings color and design.

The audience for this invitation-only event was smallish and many of these business owners seemed to know each other. I’m sure that was one reason why the atmosphere in the room felt so intimate. Another reason was that Debra Gold, an LA Mart consultant and the visionary behind this event, followed up on many mailed invitations with personal phone calls. Classy. So was the food. In a surprise twist on trade show fare, the quality of the food and even its presentation was first rate.

Las Vegas is looming large with a debut market in just a week. So I couldn’t help but wonder why LA didn’t take hold as the force in the industry that Las Vegas looks destined to become. Not only is LA a city more familiar with trend than Las Vegas, but it is also a port city. Given the increasing amount of importing from China and South Asia (of furniture and so much more), LA seems perfectly positioned to capitalize on its geography. It’s not too late. I think it still can.

At left is a picture of me at the podium for LA Mart’s Retailer Forum event.