You are here: Home / Design Thinking / Corning’s “A Day Made of Glass” 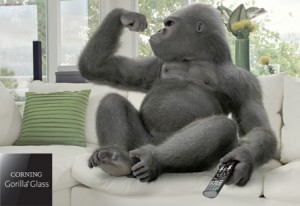 Techies the world over are well aware of how Corning’s “Gorilla Glass” was so core to the iPhone. Others became aware of it when Walter Isaacson’s book on Steve Jobs debuted telling this story (from Wikipedia) on what became known as “Gorilla Glass”:

In 2006, while developing the first iPhone, Apple discovered that keys placed in a pocket with the prototype could scratch its hard plastic surface – and resolved to find a glass sufficiently scratch-resistant to eliminate the problem. When Steve Jobs subsequently contacted Wendell Weeks, the CEO of Corning, he told him of the material the company had developed in the 1960s and subsequently mothballed.

Despite the CEO’s initial concern that the company could manufacture sufficient quantities for the product debut, Jobs convinced Weeks to produce the glass and Corning’s Harrodsburg, Kentucky factory supplied the screens for the product’s release in June 2007.

CORNING’S VISION
There is no question that “smart glass” and touch is key to computing’s future (that is, until voice recognition progresses far enough) and this video is Corning’s vision of a glass future: