If you think that 3D printing is only for making prototypes, then you’re undoubtedly not seeing the exponential increase in its use. Sites like Mashable have this 3D printing category with lots of stories, MAKE magazine has their Ultimate 3D Printing Guide, and there are even videos about this printing revolution like this one from Christopher Barnatt, a futurist in the UK.

But it wasn’t until this morning’s news feed that I first realized that 3D printing has gone far beyond typical object creation and now toward flexible, wearable, 3D printed clothes. 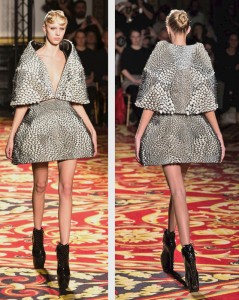 Stratasys is the world’s leading 3D printing technology company behind this new wearable 3D printed clothes proof-of-concept. They are right in our back yard here in Eden Prairie, Minnesota and is one we’ve kept a close eye on for some time.

Stratasys completed their merger in December of 2012 with Objet, Ltd., a company that provides, “…3D printing systems, resin consumables, and services worldwide. The company’s printers use its proprietary PolyJet inkjet-based technology, resin consumables, and integrated software to create 3D models directly from computer data, such as 3D CAD files.” Basically Objet had an industrial-strength, world-class capability to deliver 3D printing at scale and the merger made complete sense for a company (Stratasys) to accelerate worldwide with product, service and support. 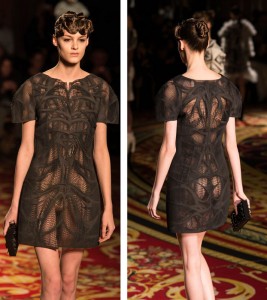 This next phase of the 3D printing revolution will see designers and creatives build products, prototype them on desktop 3D printers, and send the digital files to a service bureau…just like the “old days” of desktop publishing where files ended up at a printer who would print, bind and box publications by the thousands or millions. Same concept here: As Stratasys turns their 3D printing process from design-to-prototype-to-manufacturing (with full service and support Objet offers) then they will “own” the process like Heidelberg did for hundreds of years with printing presses.

Stratasys Ltd. (NASDAQ: SSYS), a leading manufacturer of 3D printers and production systems for prototyping and manufacturing and Materialise, a Belgian-based pioneer in Additive Manufacturing software and solutions, today announced the unveiling of 3D printing collaborations on the catwalks of Paris Fashion Week as part of Iris van Herpen’s Haute Couture show, ‘VOLTAGE’.

The 3D printed skirt and cape were produced using Stratasys’ unique Objet Connex multi-material 3D printing technology, which allows a variety of material properties to be printed in a single build. This allowed both hard and soft materials to be incorporated within the design, crucial to the movement and texture of the piece. “The ability to vary softness and elasticity inspired us to design a “second skin” for the body acting as armor-in-motion; in this way we were able to design not only the garment’s form but also its motion,” explains Oxman. “The incredible possibilities afforded by these new technologies allowed us to reinterpret the tradition of couture as “tech-couture” where delicate hand-made embroidery and needlework is replaced by code.”

Van Herpen adds, “I feel it’s important that fashion can be about much more than consumerism, but also about new beginnings and self-expression, so my work very much comes from abstract ideas and using new techniques, not the re-invention of old ideas. I find the process of 3D printing fascinating because I believe it will only be a matter of time before we see the clothing we wear today produced with this technology, and it’s because it’s such a different way of manufacturing, adding layer-by-layer, it will be a great source of inspiration for new ideas.”

According to van Herpen, motivation to collaborate with Oxman came after seeing her ‘Imaginary Beings : Mythologies of the Not Yet‘ collection – 3D printed by Stratasys’ matchless  Objet Connex multi-material 3D printing technology – that featured in the Multiversités Créatives exhibition at the Centre Pompidou,Paris, last spring. Oxman explains that the joint venture is very much an extension of the series:

“This project has taken ‘Imaginary Beings’ to ‘Wearable Beings’, myths that one can wear. The original collection includes 18 Stratasys 3D printed prototypes for the human body inspired by Jorge Luis Borges’Book of Imaginary Beings. They are human augmentations inspired by nature; but not all wearable. For Iris’ collection at Paris Fashion Week it was important to take the series to the next level, thinking not only about form and materials, but also about movement and wearability. This was a new challenge for me and for my colleagues – Prof. W. Craig Carter (Department of Materials Science & Engineering) andKeren Oxman. It inspired us to design algorithms that could map physical movement and material behaviour to geometrical form and morphological variation in a seamless and continuous wearable surface.”

Van Herpen, Koerner and Materialise have continued testing the limits of 3D printing with this 3D printed dress, proving once again that normal rules don’t apply when fashion and high technology combine. In last season’s ‘Hybrid Holism‘ collection, they first introduced the use of Materialise’s Mammoth Stereolithography machines for a stunning semi-transparent dress that one spectator compared to liquid honey. For this latest collection, ready for an even greater challenge, an experimental new material was put to use in the creation of a flexible, soft dress of stunning complexity. The piece’s intricate lace-like texture was created with precision by lasers (in a process known as Laser Sintering) and would have been impossible to realise any other way.

Julia Koerner explains, “My collaboration with Materialise for the 3D printed dress for Iris van Herpen’sHaute Couture Show ‘Voltage’ 2013 reveals a highly complex, parametrically generated, geometrical structure. The architectural structure aims to superimpose multiple layers of thin woven lines which animate the body in an organic way. Exploiting computational boundaries in combination with emergent technology selective laser sintering, of a new flexible material, lead to enticing and enigmatic effects within fashion design. New possibilities arise such as eliminating seams and cuts where they are usually placed in couture.”

Following the Paris Fashion Show, the skirt and cape will be exhibited at MIT’s Media Lab.

Stratasys Ltd. (Nasdaq: SSYS) is the corporate entity formed in 2012 by the merger of 3D printing companies Stratasys Inc. and Objet Ltd., based in Minneapolis, Minn. and Rehovot, Israel. The company manufactures 3D printers and materials for prototyping and production. Prior to merging, the two companies’ revenues totaled $277 million for 2011. Its patented FDM® and Inkjet-based processes produce prototypes or manufactured goods directly from 3D CAD files or other 3D content. Systems include affordable desktop 3D printers for idea development, a range of systems for prototyping, and large production systems for direct digital manufacturing. Since June 2012, the company’s range of over 130 3D printing materials is the widest in the industry and includes in excess of 120 proprietary inkjet-based photopolymer materials and 10 proprietary FDM-based thermoplastic materials. Stratasys also manufactures Solidscape 3D Printers and operates the RedEye On Demand digital-manufacturing service. The company has over 1100 employees, holds over 500 granted or pending additive manufacturing patents globally, and has received more than 20 awards for its technology and leadership. Online at: http://www.stratasys.com or http://blog.stratasys.com / http://www.objet.com orhttp://blog.objet.com .

Statements regarding Stratasys’ beliefs, intentions and expectations, including statements regarding the management of Stratasys, Inc. and Objet Ltd. as a combined company, the benefits of the combination of the companies, and the future financial performance of the combined company after their merger, are forward-looking statements. The statements involve risks and uncertainties, both known and unknown, that may cause actual results to differ materially from those projected. Actual results may differ materially due to a number of factors, including the risk and uncertainty that the businesses of the two companies may not be integrated successfully; the risk that the merger may involve unexpected costs or unexpected liabilities; the risk that synergies from the merger may not be fully realized or may take longer to realize than expected; the risk that management’s focus on and disruptions arising from the merger make it more difficult to maintain relationships with customers, employees, or suppliers. Stratasys’ ability to achieve the results presented in any forward-looking statement will depend on numerous factors, including its ability to penetrate the 3D printing market; its ability to achieve the growth rates experienced in preceding quarters; its ability to introduce, produce and market both existing and new consumable materials, and the market acceptance of these materials; the impact of competitive products and pricing; its timely development of new products and materials and market acceptance of those products and materials; the success of Stratasys’ recent R&D initiative to expand the DDM capabilities of its core FDM technology; and the success of Stratasys’ RedEye On Demand™ and other paid parts services. These and other applicable factors are discussed in this presentation and in Stratasys’ filings with the Securities and Exchange Commission. These filings include the definitive proxy statement/prospectus filed with the SEC on August 8, 2012, as well as the filings that Stratasys, Inc. has made with the SEC and that Stratasys Ltd. has made and will make with the SEC in the future, including its report on Form 20-F to be filed for the year ended 12/31/2012. Any forward-looking statements included in this presentation are as of the date they are given, and Stratasys does not intend to update them if its views later change, except as may be required by law. These forward-looking statements should not be relied upon as representing Stratasys’ views as of any date subsequent to the date they are given.

With its headquarters in Leuven, Belgium, and branches worldwide, Materialise has been playing an active role in the field of Additive Manufacturing (AM) since 1990. In addition to having the largest capacity of AM equipment in Europe, Materialise also enjoys a stellar reputation as a provider of innovative software solutions. They have used their experience and expertise to create a better and healthier world through their involvement in AM for industrial and medical applications, and by providing bio-medical and clinical solutions such as medical image processing and surgical simulations. Materialise has developed unique solutions that make a world of difference for its many customers with their prototyping, production, and medical needs. These customers range from large companies in the automotive, consumer electronics, and consumables sectors; to famous hospitals, research institutes, and clinicians; to individual consumers interested in bringing their own unique creations to life through i.materialise or who want to purchase a celebrated .MGX design. Discover more at:http://www.materialise.com/