You are here: Home / Trend / A Bright Future for Copper

At The Trend Curve, we’re bullish on copper—not just the color, but the metal as well—and there are many good reasons for this. The first of these is copper’s role in updating the landscape for metals within home décor. As cool metal tones recede, gold is moving into the mainstream. But copper is coming up fast, especially at the high end, adding to the overall warming trend for metal in lighting, occasional tables, decorative accessories, tableware and other applications.

Yet there is more to copper than meets the eye. Copper possesses both antibacterial and antimicrobial properties. By 1893, scientists were aware of its toxic effect upon algae, molds, fungi and viruses. This has made it ideal, since ancient times, to serve as water-storage vessels and plumbing pipes. 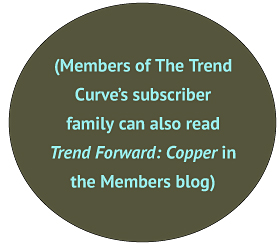 But, with today’s hospitals becoming increasingly overrun by so-called super bugs, the placement of copper objects in intensive-care units has proven one of the only ways to reduce the number of healthcare-acquired infections. In fact, one 2013 study placed the reduction of such infections to more than 50%, according to Science Daily. This has prompted hospitals to now consider extending their use of copper to all doorknobs and swinging-door hand panels throughout their institutions. All this will add momentum to copper’s growth, as consumers become more comfortable seeing it in multiple venues.

Behind the scenes, copper has superconductive properties, meaning that it will be playing a big role in electric vehicles, solar energy and even earth-coupled heat pumps, according to the Copper Development Association. This is especially good news for the USA, which has already been determined to be completely self-sufficient in copper, due to our major domestic deposits of it. In addition to this abundance of copper, about one-quarter of it is economically recoverable immediately. And of the 700 billion pounds of copper already mined in the past 10,000 years, most of it is still serving some sort of recycled use.

In short, we’re going to be seeing a lot more of copper. It’s not only beautiful, but also extraordinarily functional. With a millennia-long beneficial history with mankind, it’s a metal that has shown its mettle and truly earned its growing place as a modern fixture in our lives.

Copper was the leading metal in the 1980’s. It has all the potential to be the top choice again by 2015. The copper items below were seen at NY Now. 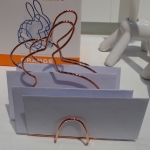 The Desk Bunny by Orange 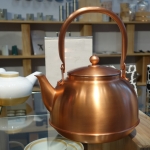 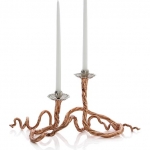 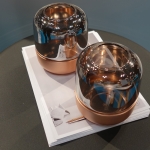 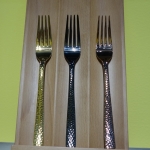 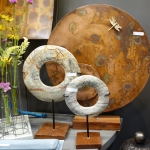