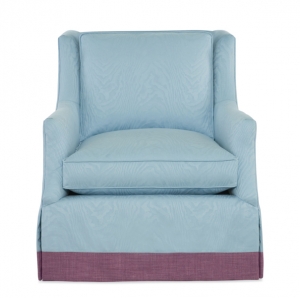 Forget the red and white on our flag, most Americans like blue best. So says Spoonflower, a web-based service for custom fabric creation, which lets users design, print and sell custom fabric, wallpaper and gifts. This company’s recent study delved into the color families most of the U.S. population chooses for home décor. (Methodology for this study is detailed below.*) Not surprisingly, blue topped the list.

Blue is a color that will calm your nerves and decrease your heart rate, making it perfect for today’s stressed consumers. The preference for blue by the the majority of Americans also indicates that we are—in a word—compassionate. This is according to the editors at Care2  and House Beautiful. Another common trait of those who choose blue as their favorite color is a strong sense of duty and the desire to be admired for being steady and wise. 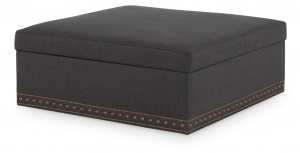 Black was once considered a decorating faux pas, but that seems like ancient history today. Now black, which is especially favored by those in the Western U.S., is on-trend. It is also said to be the best choice for those who shun just “fitting in” and definitely want to stand out. Black is a convention-busting preference for those with a true sense of the dramatic. And it is just as right for kids as it is for adults.

Currently, America’s third favorite color is gray. This is particularly true of those who live in the Southern states.

Gray evokes weathered wood, stone pebbles in the driveway, a foggy day and silver linings. It is favored by those who like to embrace the possibilities of the future. It is also the choice of those who are practical, but appreciate elegance. People who like gray best  simply don’t believe in getting bogged down in the past or nostalgia. Gray lovers are big fans of composure, peace, gentility and refinement. 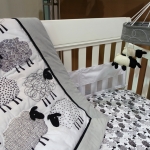 Spoonflowers’ study and found that pink, green, and red were the next favorite colors revealed in America’s décor-buying choices, in that order. Pink is believed to be the pick of those who are charming and gentle. It invites quiet conversation or a good book. Feeling romantic? Turn on the pink lamp!

Green is for those who believe in sincerity and renewal. And red is the choice of the outgoing and vigorous. Advancing and dynamic, red quickens pulse rates. A bit of red in a room adds excitement to décor.

*Study methodology: Spoonflower crunched the data from approximately 200,000 purchases of custom fabric, wallpaper and gift wrap by its customers over a two-year period and organized them under 15 color categories. It then weighted the scores by first identifying the number of customers buying a particular color in any given state or city and dividing that number by the total number of Spoonflower customers in that state or city. That gave a better measure of the popularity for each color in any city or state and so identified the most popular/most purchased color in each state and city.