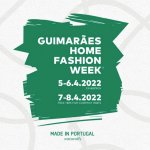 Color was a particular highlight at GHFW. So were neutrals. In fact, companies like Domingos de Sousa revealed that many clients are asking for “non-colors.” Piscatextil agrees. According to this company, neutrals are rising because they mirror consumer preferences for products that address sustainability. 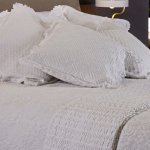 Ecological neutrals from Luma by Lumatex 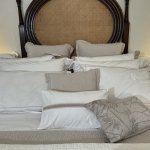 White with taupe at ACL Impex 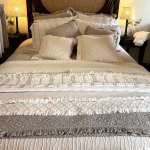 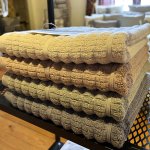 At Lasa Home, a 100% new organic cotton towel collection called Deep Nature included not only off-white, but also neutralized versions of taupe, green and gray. This maker expects that combining a sophisticated, neutralized approach to color with increasingly preferred organic-cotton fibers will result in strong sales.

Neutrals were called out as a trend at ACL Impex, where taupe accented white in a collection of sheets, shams, blankets and throws. Luma Home by Lumatex also sees neutrals trending higher. These undyed options, they believe, create a refuge of serenity, conveying an “ecological” sensibility that connects with nature and is calming.

Among the neutrals, black-and-white duos still had a role, albeit a far less prevalent one. New patterns veered away from bold, graphic looks. Instead, they preferred softer neutral contrast. Infusions of texture, small-scale geometrics, thin stripes or narrow trims done in one neutral bordering the other all told this story well at Domingos de Sousa, Locama by Parallelcotton Home Textils and others . 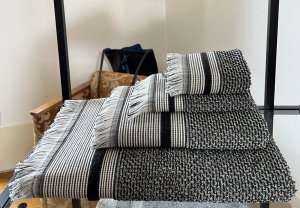 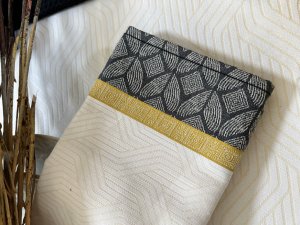 Black and white accents at Fateba

When it came to color direction, three trends stood out. Salmon was first. Capitalizing on the popularity of Blush, which has been a huge success since emerging last year, Salmon provided a variation on the theme. Like Blush, this mid-tone forms a bridge between well-established pinks and newer terracotta hues.

Salmon debuted in bath towels at Valentini Bianco, and it held a prominent position at Luzmont alongside a new pink in a towel display. Two nearby mannequins, dressed in Luzmont coverups for the beach, showed how great Salmon looks with another middle-value hue called Aqua Green.

Slightly tinged with blue, Aqua Green signaled a fresh perspective for the green family, which Mundo Textil says is trending. This color also appeared at AMR Portuguese Linens, Giestal, Antonio Salgado and at Be Stitch, where it was called Water Green.

Petrol was another hue with lots of support. Luxury Egyptian cotton bedding, prewashed and pre-shrunk, was available in this color from Graccioza, while J&F showed it in pillow cover with a pleated front. Organic cotton towels and bathmats from Sorema offered another version of the hue. Petrol came in a somewhat darker value in bath towels in the Pierre Cardin brand. It appeared in both medium and dark shades in new linen bedding from Coton Couleur, where pillow shams were trimmed in black-and-white flanges. It also showed up at April & May, and Almeida, as well as at JR Home and Mario & Antonio. Almeidas Textile combined it with other mid-tone values in a print for top-of-bed.

Almeidas Textile demonstrated how versatile Petrol can be within a palette

Other color updates from GHFW:

The 2023 edition of Guimaraes Home Fashion Week is scheduled to take place May 9 – 10, with time reserved for visits to manufacturing company facilities on May 11 – 12.