You are here: Home / Trend / Color / Color for the Latino Market

Another request arrived today. It came via email in the form of a question. Does The Trend Curve™ have a color forecast targeted to the Hispanic/Latino market?

I had a similar question while working with clients last week and another over the phone from a long-time client and subscriber in September. Before that, it had been nearly six months since another subscriber broached the subject of a palette for Hispanic consumers. I took notice of four requests in a year when none had come in the five years prior.

Perhaps it is time to consider developing a color forecast for this niche?

I have resisted doing so for some time. Why? Because I believe that there are colors within the hues and personalities of The Trend Curve Colors™ that work for a broad range of consumers, Latinos included. I alsosensed that creating a color forecast for the Latino market, theAfrican American market, etc. would be a statement that all Latinos arethe same, all African Americans are the same, and so on. They are not. 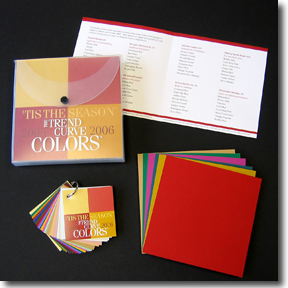 My friend and colleague Erika Woelfel of Colwell General¹s ColorStudio tells me that just a few short years ago, consumers selected values of paint represented by the lightest two colors on a stripe card. Today they are more likely to pick the darkest two on that same card. This is happening across the country.

With the use of color now so prevalent, is there a need for a separate palette for the Latino market? We already have niche palettes for Christmas (‘Tis The Season™ Colors) and new neutrals (Skin-Tone Neutrals™ 2006 – 2007) Weigh in with your thoughts and ideas by leaving a Comment below or by sending me an email.