You are here: Home / Haute Halloween and Fall / Digital Décor

It stands to reason that Halloween would be the first holiday to offer a platform for digital décor. That’s because it’s the kind of holiday that requires an overall atmospheric transformation of living and entertaining spaces to haunted, eerie and even terrorizing themes. In fact, “digital” decorating has long been generated by such Halloween favorites as Froggys Fog, the premier fog fluid manufacturer in the U.S., which boasts “a fluid for every effect.” And seasonal product makers have produced everything from screaming doormats to talking-owl tree ornaments for decades.

But Frightfully Entertaining’s® Digital Decorations® has helped to take this type of décor to a new, more complex level with their AtmosFEAR FX series of DVDs. Originally made for admission-charging businesses like amusement parks and haunted houses, AtmosFX decided to tailor a line of these DVDs for the general consumer and sell them through retail channels. Offering themed loops of Halloween-image footage and audio for DVD players to show on TV and monitor screens, this series can also be used, to stronger effect, in a projector that endows walls and windows with a wide array of spooky images and storyline. The lighter side of AtmosFEAR FX’s current DVD selections includes their Jack-O-Lantern Jamboree of singing and tale-telling carved pumpkins and Tricks and Treats silhouette footage of trick-or-treaters encountering monsters. Scarier and gorier fare includes DVDs such as Bloody Walls, Zombie Invasion and many more. In short, there’s a DVD for just about every age group and party theme. 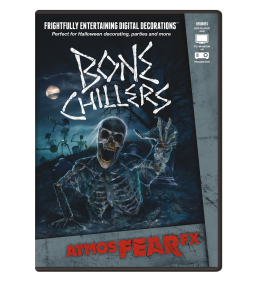 The truth is there’s nothing particularly new about a Halloween DVD playing on a TV, since people have been hosting scary-movie nights for autumn gatherings for years. What makes this digital décor new is the ability to project it onto walls, windows, house fronts, and entryways to make it a part of overall Halloween decorating for both party guests and trick-or-treaters.

It’s unlikely that digital decorating will take the place of physical décor. Like Halloween music and sound tapes, this type of décor is primarily intended to create atmosphere. It isn’t meant to be physically interacted with in the ways that Halloween tableware, guest towels and candy containers are. Digital decorating is about lighting, sounds, and images. So, rather than rivaling physical decor, it’s on track to simply complement it. That said, it’s safe to predict that we’ll be seeing far more Christmas-related digital décor entering the sales sphere soon, as well.