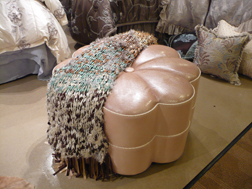 The October High Point Furniture Market doesn’t officially begin until tomorrow, but I had a full schedule of appointments today. That’s typical for me and for many in the press. We like to get in and out of some of the showrooms — and out of the way of buyers – early on. Several companies, like Bernhardt, Baker and Stickley, also had press receptions, which offered another opportunity to see collections when buyers are not there. But Laneventure, Pearson and Rowe were also good enough to see me a day early.

I began my morning in the InterHall area, a section of the market known for being fashion-forward. There are both furniture and decorative accessory companies in this area. Most of the companies are small-to-medium size and privately owned. No one has a large space, but everyone packs a lot of design into the square footage they have.
One of my favorite pieces in InterHall came from Tomasini Fine Linens. Their crochet satin-ribbon throw with 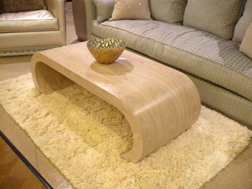 Silver eyelash was a knockout. The pastel Pink ottoman in an embossed, pearl-effect leather that it was sitting on was equally on-trend.

I was also taken with oak case goods at Patagonia Trading. They come in oak with Winter White or Gray stains. Yes, they are light, which is exactly what makes them so trend right.

I finished the day at Raymond Waites’ gallery on Main Street. I have always admired Raymond’s talent and vision, so I wanted to drop by to see his work and participate in a silent art auction on behalf of the IFDA (International Furnishings and Design Association) Educational Foundation’s Raymond Waites Scholarship Fund. I bid on two items, both decorative accessories that I would love to have. I was there early in the evening so there isn’t much of a chance that my bids will finish out the night as the top ones, but I can still hope!