You are here: Home / Trend / Keeping Embellishments Simple at GHFW 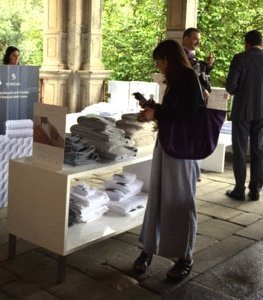 One of the biggest trends at this year’s fair came from embellishments. This was not because they were opulent or complicated. Instead, it was because details had become so simple, delicate and—in some cases—even diminutive. Consequently, each one required a closer look. At the same time, each provided much-needed balance to the high/low surfaces, intricate weaves and incoming tweed combinations found in the fabrics they decorated.

Sorema said that layered details are a thing of the past. As a result, this company showed products that downsized both the applications themselves and how much design was included in each one. New techniques like uncomplicated stitches rose in popularity. Their collection featured embellishments from narrow lines of embroidery on flanges to simple channels on comforters.

Graccioza took a similarly straightforward approach. Borders in one bath rug collection, for example, were created using narrow, color-matched tape. The tape utilized only a basic running stitch on the inside and outside edges. Other mills followed suit: 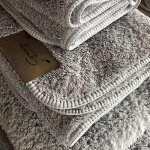 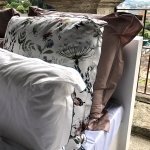 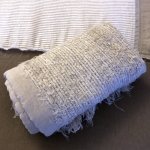 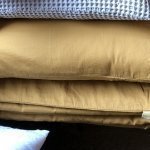 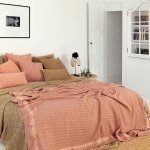 Comfort & Innovations described their newest embellishments as “delicate.” Options included a spare approach to stitching on pillowcases, as well as four thin, embroidered lines on the face of a duvet cover. New Plaids utilized simple whip stitching on cushion edges. Meanwhile, ACL Impex showed a white cushion with a simple, well-spaced embroidered design, placed in an asymmetrical band. All this fits their customer’s quest for “comfortable luxury,” defined as a luxurious, yet simple style.

At AMR Home Textiles, an ultra-narrow line of scalloped embroidery, alone or over a thin, contrast-color ribbon, looked just as modest. 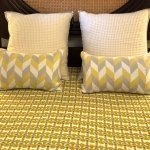 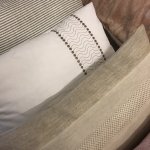 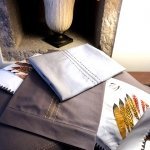 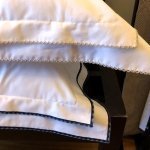 Contrasting ribbon or fabric trim was among the most understandable decorations seen at the fair. This look was front-and-center on cushions from Coton Couleur. Texteis Leiper showed it on a patterned coverlet. So did AM/April & May Lda. Antonio Salgado featured dark blue whip stitching along the edges of a orange cushion. This combination highlighted color contrast. 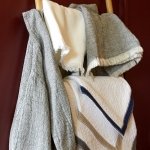 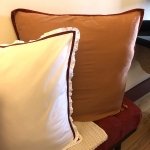 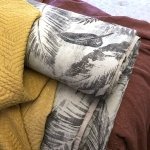 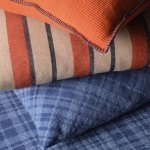 With a similar pared-down look, pleats made a comeback. Small, neat and tiered pleats gave pillow-case edges and cushion fronts a trim appearance at Cris Home. Suggesting wider pleats, JPF overlapped three shades of brown on the border of a sham.

Were pared down looks the only embellishments at GHFW? No. Crochet details were still in evidence. Unfinished edges on ruffles and hems were also present. So were pom-pom trims. That said, these design elements were used far less than they were a year ago—another signal that complicated embellishments are in retreat.

Look below for another photo gallery of embellishments from Guimaraes Home Fashion Week 2019.