You are here: Home / Michelle Lamb / The New Bronze Age 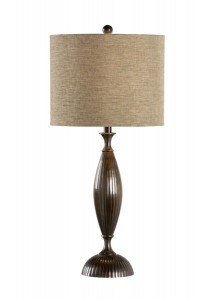 As bronze comes into clear focus for 2016 décor, it’s interesting to take a look at its illustrious past and all that it did to define humankind’s development. Bronze is the much harder metal that’s produced when tin or arsenic is added to copper. It was this durability that led to the use of bronze, not only for making weapons and armor, but also for the creation of building materials that were much longer-lasting than stone and copper. Decorative tiles were among the first items of home décor to be cast in bronze, dating back as far as the 3rd-millennium BC. Talk about a material with staying power!

Historical bronze varied widely in composition, because metalworkers began to add whatever scrap metal was on hand to their copper mixtures. A 12th-century English bronze candlestick base, for instance, contains zinc, lead, nickel and iron, and is believed to have been made from old coins that were too worn to remain in circulation.

Because bronze resists corrosion, it became a favorite for boat and ship fittings. Much later, its low-friction properties made it crucial to building cannons.  And its natural conductivity eventually led to its use in electrical connectors and springs. 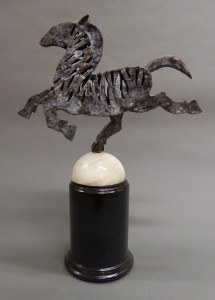 Bronze did well in the industrial era, but its artistic uses evolved along with its technological ones. It is, to this day, the preferred metal for making top-quality bells, and its strength and resonant qualities have made it a regular part of stringed instruments. Sculptors return to bronze again and again. The sculpture example shown was cast by John Currie, Editorial Correspondent for The Trend Curve, who is also a painter, award-winning sculptor and graphic designer.

The Trend Curve’s Editorial Director, Michelle Lamb believes that bronze will gain a foothold in home décor in the coming two years. It will be used under finishes that refer to other metals, but will increasingly be recognized in its own right. Watch for it in lighting, tables, decorative accessories and more. Bronze fits not only with the market’s recent (and growing) embrace of warm metals, but also with an incoming color palette for 2016 that’s bullish on browns.

But we know that bronze is much too important a metal to simply be seen. It’s to be heard, felt, and treasured in our day-to-day lives, as it has been for thousands of years.