You are here: Home / Trend / Our Town 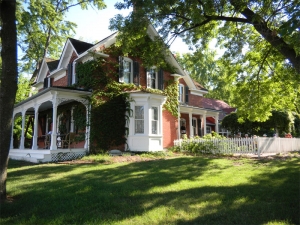 What better time to explore the history of your town than Memorial Day weekend? Marketing Directions, Inc., publishers of The Trend Curve has had different addresses over the 26 years we’ve been in business, but Eden Prairie, voted the number one place to live by CNN/Money in 2010, has been our home for the past decade and a half.

For most of its existence, Eden Prairie was a pastoral village on the far southwestern fringes of Minneapolis. It’s a place where the carriage road, which still exists as a footpath through a nearby woods, was eventually abandoned for the railroad. And trains still rumble and whistle through here a couple times a day.

Between 1880 and 1960, Eden Prairie’s population barely changed.  But, by 2000, this agricultural area burgeoned to a population of over 60,000 and our little Eden on the Prairie became a thriving, business-rich community and one of the nation’s most highly prized places to live and work.

But, as with your town, if you look too quickly, all you’ll see is modern housing and roadways. If you don’t stop and listen carefully, you won’t hear the whistles of the trains that once carried so much of our bounty of grains to other parts of country, and so many of their badly needed goods back to us.  You’ll never know that the largest lake in our town was named for its first postmaster and you’ll fail to notice, let alone visit the 1800’s landmarks that our local historical society has been wise enough to preserve.

We’re willing to bet your town is every bit as rich in its history, so don’t just settle for the usual boring bar-b-que this Memorial Day weekend – get out and really see where you live and how the past became your present.