Graeme Thickins, is a marketing consultant and advisor to technology firms. He is also a co-founder and author on The Trend Curve’s sister site, Minnov8. Graeme launched his business more than 25 years ago after positions in marketing and communications with pioneering tech giants Control Data and Medtronic. He’s served as an advisor to more than 150 startups and corporate ventures that have achieved billions of dollars in shareholder value, some achieving highly successful IPOs or acquisitions for as much as $900 million. He’s also filled interim marketing or content executive roles for many of his clients.

Graeme has extensive credits as a published writer and analyst (more at his LinkedIn profile). His blog, now called GraemeThickinsOnTech, was launched in 2005. You can follow his daily updates at www.twitter.com/graemethickins. 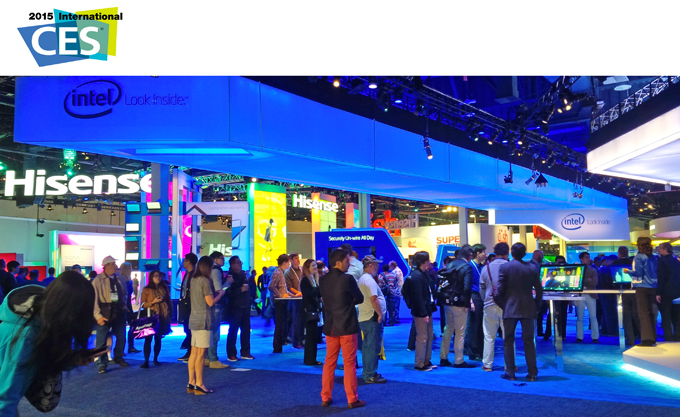 Think of it as the morning after. Actually, it was the Monday following the week when 2015 International CES ended, on a Friday. I was scrolling through my email, trying to decompress — feeling some pride in surviving multiple weeks of being blasted with hundreds (thousands?) of PR pitches from an absolutely cuh-razy variety of exhibiting companies, from all over the globe. The blisters on my feet weren’t hurting so bad anymore. Whew! Things were finally starting to… slow… down.

Part of this decompression process is always trying to form in my head my overall opinion of the show — this after writing a couple of posts (and shooting a ton of photos), but no one person can ever really write enough posts to describe their entire experience at this thing. Which begs the question, how the heck do I summarize yet another year of this massive tech-product sensory overload? It is not easy netting it out!

As luck would have it, however, along comes one last, lonely email pitch, from a smart PR guy in New York (Jay Kolbe, Managing Director of SparkPR). I’ve never met him, but I’m liking what I’m reading. He’s telling me what he has today is “the most comprehensive data set you’re going to find about CES, with regards to what was actually ‘talked about’ and ‘seen’ in the last week online, via mobile and across Twitter.” Music to my ears!  He’s summarized it for me… with real data!

So, what follows — pretty much word-for-word — is what he proceeded to tell me in that email pitch. I asked him if he had any charts to support his summary, and he quickly complied.  The data, and the charts, are from Amobee Intelligence, a digital marketing company that developed an intelligence technology platform, which is described at the end of this post. (Amobee is, you guessed it, a SparkPR client.) Herewith, that data summary, which supports a lot of what I had observed with my own eyes (and heard and read) at the show. But it gave me more insight than I could possibly have gathered on my own… and nothing beats real data, ya know?

Samsung, Sony, and LG made the biggest impact at CES, but not necessarily for what they actually showed during the event. In several instances, awareness for these brands was driven as much by what they didn’t bring to the event as to what they actually displayed. TVs and computers were strong, as always, but washing machines (yes WASHING MACHINES! as in the “Internet of Things”) and Wearables were as prominent as ever. And the auto industry continued its growing involvement with the event, mostly on the strength of talk about self-driving cars.

Samsung indexed as the most “seen” brand online, via mobile and across social, during the week of CES. From curved computer screens, to SUHD TVs with enhanced LCD backlights, to washing machines with built-in sinks for washing delicates, what made Samsung stand out was the sheer volume of products that they brought to the event in Las Vegas. Also gaining them notice was their renewed focus on the “Internet of Things.” By 2017, Samsung is projecting that 90% of their products will be connected to the Internet.

Mobile Products and Washing Machines: Top of the Class at CES

While rumors that Samsung would debut the Galaxy S6 at CES proved untrue, that phone still caused a sizable amount of online chatter, driving speculation that they were showing the smartphone privately to carriers at the event. Galaxy S6-related interest represented 11% of all the Samsung awareness around CES.

Nearly as ubiquitous, Sony had 71% as much CES-related consumption as Samsung between January 6-9. Among the Sony products generating interest were what they claimed was the world¹s thinnest 4K TV, Playstation Now (an app that lets you play popular video games from the cloud without needing to buy a console), an HD action camera with 4K video, and the relaunch of the iconic Walkman — now reimagined as a high-end HD music player with Bluetooth headphones for serious audiophiles.

As with Samsung, much of the discussion around Sony was for the highly anticipated Xperia Z4, which wasn’t publicly shown at CES, as many hoped, driving discussions online that accounted for 24% of all Sony-related awareness at CES.

Another brand making waves was LG, which had 61% as much CES awareness asSamsung during the event. LG was a brand that did unveil its big smartphones at CES, with the bendable LG G Flex 2 accounting for 22% of all LG-related consumption at CES. Other hits included seven 4K OLED TVs with Quantum Dot Displays and an extremely popular Twin Wash washing machine, which pragmatically allows you to get two loads done at once. There was also a semi-mysterious smart watch built for Audi that allows you to unlock your car, among other functions.

Meanwhile Intel had 37% as much related awareness as Samsung over the course of CES. 12% of Intel CES related consumption was around Curie, the button sized platform meant to power the next generation of wearable devices, with another 6% of Intel¹s awareness at the convention related to RealSense. While RealSense is already in the market, much of the focus in the Intel keynote was around both practical and imaginative applications for the camera recognition system. Intel also made a big splash with their announcement that they¹d be devoting $300 million to improving workplace diversity in their workforce.

Lenovo managed to draw 16% awareness as Samsung, driven by their lineup of Tab 2 A7 tablets, Flex 3 laptops, and the S41 Notebook – all budget devices. Blackberry had 13% as much awareness as Samsung, largely around the announcement of QNX becoming an “Internet of Things” platform and around BBM messaging coming to Android Wear. It appears that their embracing of IoT is helping return Blackberry to prominence.

There was 12% as much consumption around Asus as Samsung, almost exclusively around the Zenfone 2 phablet.

For the second year in a row, self-driving cars made the biggest impression at the event. With 11% as much awareness as Samsung, Mercedes-Benz made a splash with their self-driving car prototype, the F 015 Luxury in Motion. Meanwhile, Audi had 10% as much awareness as Samsung, around their own autonomous car and the previously mentioned LG watch prototype.

There was 46% as much CES-related awareness around BMW as around Mercedes-Benz, primarily for the BMW iHome Charging Service for electric cars and their experimental ActiveAssist technology, which literally makes it impossible to crash your car when you¹re parking it. NVIDIA had 31% as much CES awareness as Mercedes, mostly around Drive PX platform that identifies objects from up to 12 cameras at once, and will be used to power self-driving cars. Volkswagen had 30% as much CES awareness as Mercedes, around their Golf R Touch touch-less gesture-controlled interface concept and semi-automatic Park Assist feature.

[A note from Graeme: See my post about the VW press conference.]

At slightly lower of a profile, Ford had 19% as much CES awareness as Mercedes-Benz, mostly around their SYNC 3 communications and entertainment system, with such features as improved voice recognition. Similarly themed, Parrot had 13% as much CES related awareness as Mercedes-Benz — around The Simple Box, their connected automotive infotainment solution. Android Auto also had 13% as much CES awareness, as brands like Volkswagen, Kenwood, Parrot, and Pioneer integrated Android Auto into their products.

Making less consumer focused news, Toyota had 8% as much awareness as Mercedes, on the heels of releasing 5,680 patents around their fuel cell technology, in an effort to promote “unconventional collaboration.” Finally, Chevy had 4% as much awareness around their last-minute decision to unveil the 2016 Chevrolet Volt at CES, instead of the Detroit Auto Show a week later.

Like Dark Matter, Apple Was Part of the CES Conversation Even When It Was Unseen

Apple had 9% as much CES awareness as Samsung, not because of what they presented at CES (because they never do), but because their products were being compared to products that did launch at CES. For instance, there were several competitive products to Apple¹s automated home center called HomeKit, and numerous smart watch competitors to the upcoming Apple Watch.

[A note from Graeme: To keep up on the world of wearables, here’s a great resource.]

About Amobee: The above data was compiled by Amobee Intelligence (formerly Kontera), a company that helps brands understand the world’s content and customers’ interests. Its Intelligence platform analyzes the content being read and consumed on the Web, on social platforms, and on mobile devices. This historical and real-time information is used to provide marketers with trends and actionable insights for marketing strategies. Each day, the company cross-correlates the consumption patterns of more than 2 billion content items as they are seen and read by consumers across the web, mobile, and social digital ecosystem.

Core Technology & Platform: Amobee’s Marketing Intelligence focuses on surfacing both real-time and historical interest trends and patterns based on what content people actually “see” and consume across the entire digital ecosystem. Its Brand Intelligence technology is based on several proprietary semantic, statistical, and linguistic algorithms that analyze and correlate consumption of social, web, and mobile content. This real-time platform examines on a daily basis what consumers see and their content consumption patterns as they view and consume across more than 400,000 websites, 550 terabytes of video, 1.4 billion tweets, 450 million articles, 550 million images, and more than 300 billion phrases, to quickly aggregate actionable insights on more than 27,000 interest topics, 8,000 celebrities, 12,000 locations, and 350,000 products.