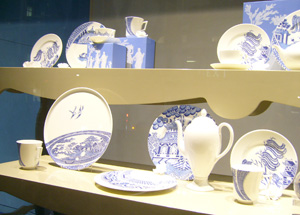 Portobello Road is a fascinating place for people watching in the Notting Hill neighborhood. It is also a great mix of old and new. Today, Editorial Correspondent Mary Sausen and I spent several hours strolling down that street, stopping to munch on a fish and chips lunch along the way. We found a darling little card and gift shop called Banana Moon, where were found some pretty fabric cards. In the stalls on the street, Mary bought a 1920’s Art Deco cocktail purse from a man who turned out to originally be from Brooklyn. Small world…

After a fabulous play, Noel Coward’s Hay Fever starring Judu Dench, we walked back from the Theatre Royal Haymarket to our hotel via Regent and Oxford streets, taking pictures of windows along the way. There were some terrific ones, like the Wedgewood window showing a pattern called After Willow (see left) that brings the old Blue and White standard into the next century, We also liked the Dr. Who robots and figures at Hamley’s toy store and the all-Aqua barbeque vignette at Marks & Spencer.

But the windows that won our hearts for whimsy and creativity were found at Selfridges. Each of their windows had a name, visibly given through a cartoon-like bubble that hung in each vignette.

Three Sheets To The Wind was all about bed linens, cleverly displayed as though they were hanging out to dry in the back yard. The Pot Calling The Kettle Black replaced mannequin heads with—you guessed it—a pot and a kettle, both Black. Everything But The Kitchen Sink was all about colorful kitchen products crowded along the counter with cans and boxes of food. She Had Enough On Her Plate featured a mannequin wearing a Givenchy blouse and a skirt made of Wedgewood plates, all in White

Our favorite was called Turn To Jelly. In this window, a mannequin is dressed as a male runner in mid-stride. In the sequence that moves from left to right across the window, he runs through a wall of jelly beans, coming out on the other side covered in beans, not wearing his clothes. Very fun.