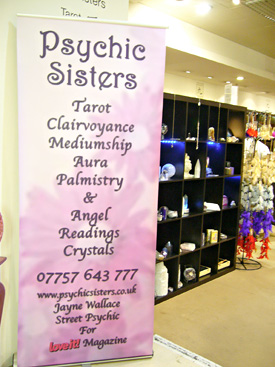 It seems I always find something new at Selfridges, the London, England department store I visit on Oxford Street. Today, my first trend-spotting day in London, was no exception. Editorial Correspondent Mary Sausen and I came across a new area in Selfridges lower level, the floor where the home furnishings products are sold.

What caught my eye initially was the color Purple, which I now reveal to everyone as my hands down favorite regardless of shade. It took me a second to realize that the Purple was shown in crystals sitting on a bookshelf. And not only were there crystals (in other colors, too), there were also dream catchers, healing stones and angel figurines, all offered for sale.

More surprisingly, there were psychic readers on hand in the store. These readers were described as top UK psychics and mediums, all of whom have appeared within the media. Customers could stop spontaneously or schedule a half hour appointment via phone or email for a time during the store’s open hours. Screens were set up between table-and-chair vignettes to provide privacy and quiet for what a sign called “consultations” using a number of sources: 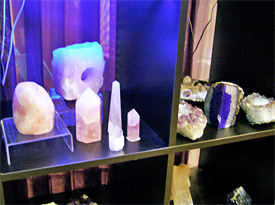 Neither Mary nor I had a reading, although I did pick up a brochure describing the psychic skills of five readers, and we did meet Robin (who reads palms) and visit with him for a moment.

Even though our experience there was a short one, both of us marvel at how something like psychic readings—activities that were far outside the mainstream just a couple of years ago—could now be had during a 30 minute break from shopping.