You are here: Home / Trend / Retail Trends / SALES Are On In London!

It is difficult to judge any retail environment too harshly during the early part of July, the time when nearly everyone is clearing their summer merchandise to make way for the new fall assortments. London’s Oxford Street was in full SALE mode today, with just a couple of exceptions (like Monsoon, which showed a full price assortment both of the two stores we stopped in today). This makes it a weak time to shop for lots of newness (color,fabrication, style, etc.) but a great time to shop for your closet. That is exactly what Biz and I spent our day at today.

(Note: Steve and Alex were happy enough to leave Biz and I to our shopping. They went to Madame Tussaud’s wax museum—which we had no earthly interest in seeing—and spent several hours there taking pictures and critiquing the figures…Morgan Freeman and Johnny Depp were more realistic than John Travolta, for example. Who cares about that when there are sales in the shops?)

The four of us split up for our gender-specific day after a late breakfast together. Biz and I arrived at the Urban Outfitters at Oxford Circus around 11:00. This store did not look fresh and I am not sure this had anything to do with their clearance sale. In fact, I’m sorry to say that on my last visit in May I had the same impression. Once innovators in visual display, their windows, mannequins and tables have seemed to be stuck in the past this year. Still, a couple of pieces stood out in the visual muddle.

The first was a display of Red candles overprinted with silver metallic. This was a great example of the foil trend that is ripping through apparel being interpreted appropriately for home.

The second was an array of Minty Greens. We also saw this type of Green at Monsoon and Selfridges, as well as at Zara. At left is one of my favorites. Next to it, notice the Gray top. Even in the midst of clearance it was easy to see that Grays were getting warmer as they grew in importance for the fall season.

Zara and Mexx were both big hits with Biz; I like the point of view from both of these chains too. Not a big fan of foils, Biz instead gravitated to metallic thread used for visible stitching. The example here is from Zara. You will have to look closely around the letters to see it, but it’s there acting like a hint of bling that really makes the piece special. 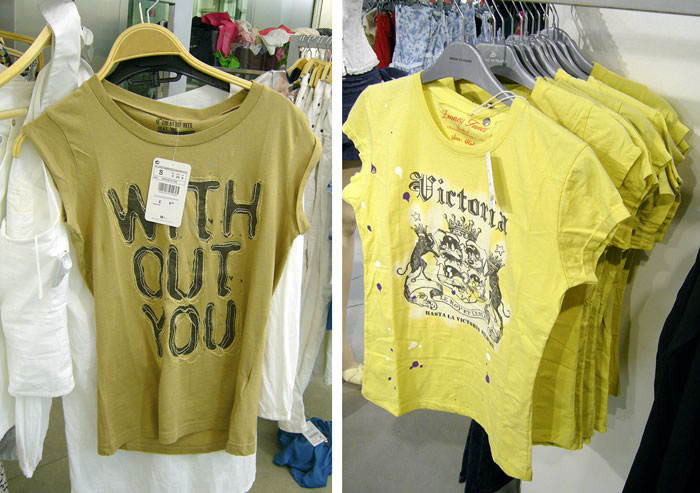 I am, in some ways, afraid of what I have exposed Biz to here in London. She loves the shops. Having received generous cash gifts for her recent graduation, she is also under the impression that she can but with abandon. But with an exchange rate of nearly two dollars to the pound (we exchanged at $1.94 today!), I had to keep reminding her to double the price of anything she saw in pounds.

In spite of my admonishments to do the math, Biz bought some great jeans that had floral applicqué, embroidery and bleached-out effects all together on the legs. I must admit that I wanted a pair of them, too. I bought a fabulous example of a pale Mint Green to show Laura Colón, my assistant, when I get back next week.

The sale shelves at Zara were filled with bright Yellow tops and sweaters that did not sell, causing me to wonder if the buyer was overly enthusiastic in their summer buy of that color, or if consumers simply resisted no matter how much of it they saw. Even reduced to a more-than-reasonable five pounds apiece there were still many unsold.

At Therapy, a more subdued Yellow looked great in a T-shirt decorated with one of the several heraldic designs that Biz and I saw in apparel this trip. An unexpected update: graffiti splatters in Purple. You can see the shirt at left.