Paris Déco Off bills itself as The Rendezvous of International Interior Designers and Decoration Editors. The Trend Curve’s editorial team always heads to Paris a couple of days before the Maison & Objet trade fair to see what’s new in the world up upscale fabrics and designs. 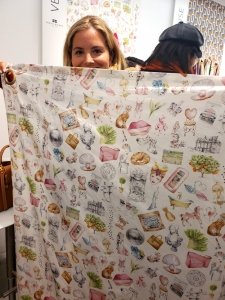 The 2020 edition, held January 16 – 20, boasted 117 showrooms in the St. Germain quarter on Place des Petits Pères and Place Furstenberg. Among them was the Fabricut showroom on Rue Jacob. That’s where we met the inimitable Sasha Bikoff, who was showing off her new line for Vervain. Bikoff, who has a passion for pattern as well as color, was effervescent.

“I’m excited,” she said. “Textiles are my favorite part of design.” She set out to create a collection of novelty patterns that are fun and feminine, an homage not only to 18th-century French, but ‘80s style.”

One highlight of this collection was the fabulously detailed Favorite Things series. Literally. Hers. The charming imagery, printed on linen (with coordinating wall paper), came in a pastel-rainbow colorway called Tutti Colori:

Is it a viable collection? Yes, absolutely—even more so now. Bikoff could not possibly have known in January that the whimsical patterns and vivid solid colors she designed would be just what the market needs today, now that life has become so very serious. They could all be characterized as uplifting.

Another design, a delightful take on an 18th-century classic called Uptown, features a woman walking her poodles on Fifth Avenue, the Beverly Hills Hotel, water skiing in St. Tropez and bath-tub time. Said the designer, “They’re all me.” 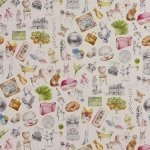 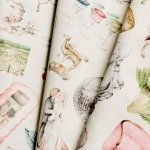 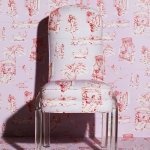 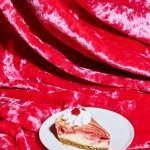 There also is a companion luscious-pink panne velvet called Lipstick, which the Bikoff says reminds her of “the shiny and wet feel of lip gloss.”