You are here: Home / Editorial Correspondent / Time For Change

A year ago, all the best new collections from the New York Tabletop Market were right in step with the mix-and-match mantra. But according to contributor Bessie Nestoras-Knoblauch, directional companies at the April, 2015 show had shifted to showcasing traditional four- and five-piece place settings. 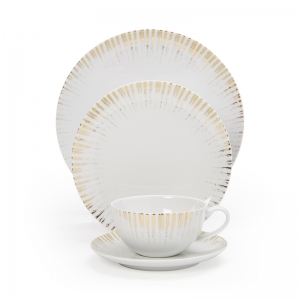 While some designs were repeated over all the pieces in a set, other place settings changed things up a bit. They offered varying styles within the same pattern, providing consumers with a less literal take on the set. Yet even in these situations, the result was still a very coordinated look, the likes of which the market has not seen for years.

Is this return to sets, vs. collections, a sign that tradition is making a comeback? Yes! A Neo-Traditional trend, first forecasted by The Trend Curve almost three years ago, is now getting a foothold, and four- and five-piece place settings are part of it.